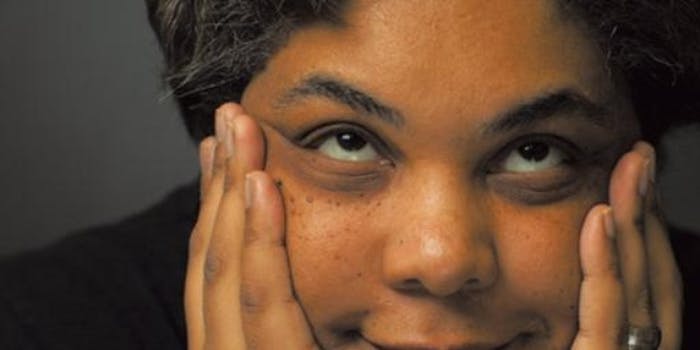 We talked to Roxane Gay about ‘Bad Feminist’ and beyond

Writer Roxane Gay opens one of the essays in her new collection, Bad Feminist, with these words, a statement that no doubt resonates outside the pages. Bad Feminist touches on feminism, the Internet, race, class, education, and young adult literature. She tells her story through the lens of pop culture and criticism, and moves from writing about “Blurred Lines” and The Help to connecting the Hunger Games novels and her own trauma as a young girl.

But essays on bad feminism bookend the collection, as Gay takes a deep looks inward:

“There are many ways in which I am doing feminism wrong, at least according to the way my perceptions of feminism have been warped by being a woman.”

In another essay on Facebook COO Sheryl Sandberg, Gay explores the “have it all” maxim, which has become a common refrain online, along with a challenge: Can she? Elsewhere, Gay offers an alternate, perhaps more accessible definition of feminism: women who don’t want to be treated like shit.

“Alas, poor feminism,” she writes. “So much responsibility keeps getting piled on the shoulders of a movement whose primary purpose is to achieve equality, in all realms, between men and women. I keep reading these articles and getting angry and tired because they suggest there’s no way for women to ever get it right.”

Gay, who also teaches creative writing at Purdue University, spars and philosophizes on Twitter. She was recently cited as one of 35 writers who “run the literary Internet,” and her debut novel, An Untamed State, illustrates her way with narrative around issues of sexual violence, class, and privilege. She says she started calling herself a “bad feminist” as a tongue-in-cheek remark.

We asked Gay a bit more about her bad feminism, the role of Twitter, and the enduring legacy of Sweet Valley High.

Do you see feminism as a guide or an identity?

Oh, it’s an identity. I believe in the equality of women, and more than that, I believe we have to consider all of the things that contribute to identity: race, class, gender, sexuality. The things that shape how we move through the world. Feminism is part of my identity, but it’s not the whole of my identity. But it’s also a guide; trying to understand the world and how it affects women, and what we can do to change those things that affect women negatively.

What is the state of feminism on Twitter? Is it healthy? Is there too much policing?

I think it’s a chaotic mess, but it has to be because it’s a huge issue we’re dealing with, and there are a lot of voices, and voices create space, so it’s going to be awkward. There’s always too much policing on Twitter. … It’s just human nature to police each other, and try to control each other. But I don’t think that has anything to do with feminism, and everything to do with human nature. I think, alternately, these are growing pains, and growing pains are healthy.

How did people on Twitter react to your story about racial profiling at Best Buy?

Well, any time you talk about race in America, someone’s going to tell you that you’re wrong, that it was probably just bad customer service; people were asking me why I won’t talk to CNN, that I was making it up. I was just ranting on Twitter. I had no idea the story it’d become. That wasn’t my intention. But at the same time, I wasn’t going to stay quiet. The manager of that Best Buy, we actually spoke a few days ago, and he [and the employee] apologized. But the other side was people of color saying, “ I could easily have written this. Thank you for speaking up.”

What do you think about the role Twitter’s played in Ferguson?

I think Twitter has been absolutely instrumental. Whenever people talk about how Twitter is a waste of time, I point them to what Twitter does in times of social upheaval, here and elsewhere. Without Twitter we would have a fraction of the information we have about Ferguson. I know we need journalism, but good journalism isn’t as agile, and Twitter is very agile in these circumstances.

Is the rise of the citizen journalist a positive thing?

Yes and no. [Training] is important, and allows us context and history. One of the things I’ve appreciated about journalists, especially this week with what’s going on in Ferguson, is seeing people talk about the economic disparity in the community, and the egregious imbalance of how often African-Americans are stopped, for example, for traffic stops. That context is important, in addition to the moment outrage of, “I can’t believe this is happening.” We need to know why this is happening again.

What did you think about the Women Against Feminism Tumblr that was going around?

They’re entitled to that opinion, but it’s sad to see women feel that way. It’s ironic to see women feel that way. I don’t put much trust into these campaigns where you stand in front of a camera with a placard and think you’re doing something. Actually, I think it’s perfectly appropriate what they’re doing, creating a Tumblr. I think it shows just how little they understand this world and the importance of feminism.

I was always more of a Baby-Sitters Club fan, but I really liked your essay on Sweet Valley High. What was it about those books that grabbed you, and how do they tie into the evolution of what young adult lit is today?

I appreciated the constancy of them. There was a formula, and that formula is pretty much there in every book, but they were just so familiar. And books were always the familiar thing for me. I think also, they were these people who were so enviable but they had drama too. Sweet Valley High is a soap opera for young adults. And oh what a soap opera it is. I think what it allowed you to understand is the stories of young people matter and deserve to be told, even when they’re flimsy. … As a feminist and a woman of color, I look at those books, and I think there was only like one or two black characters across 100 or so books. Really? That’s a problem. I would love to see a Sweet Valley High that focused on people of color. … But it did open up this space for YA to flourish.

Your chapter on The Hunger Games: When did you make that connection with your sexual assault?

It’s not something I was going to write about. I was just like, “Why do I love these children’s books so much?” I started writing the essay after I saw the movie with my boyfriend at the time and a friend of ours. And I love the movie; it was like a rapture for me. And I was really sitting down and thinking, “OK, these books have had a profound effect on me.” I began to write the essay, and I was thinking about Peeta [Mellark], of course, and then I realized that I really connected with Katniss and this overwhelming sense of unending trauma she endures across the books. And it was so accurate, how she dealt with that trauma, and you could see the results of it. … And I think I needed that to say, “It’s OK to show your damage.” That got me thinking about getting raped when I was a child, and how really it was books that saved my life. I was able to read books and know I wasn’t alone and that bad things happen to good girls.

Has teaching a younger generation made you hopeful?

Absolutely it makes me hopeful. How could you not be? Even when they’re frustrating, they’re still awesome. They think in ways that always surprise me. And teaching keeps me motivated as a writer. These are the people that I need to be writing to.

Are you seeing women, or men, embrace their feminism yet?

No, not yet. I often times in the classroom get women who say, “I don’t need feminism.” One girl told me feminism is bullshit. And I was like, “Girl, no. I’m gonna need you to stop that.”