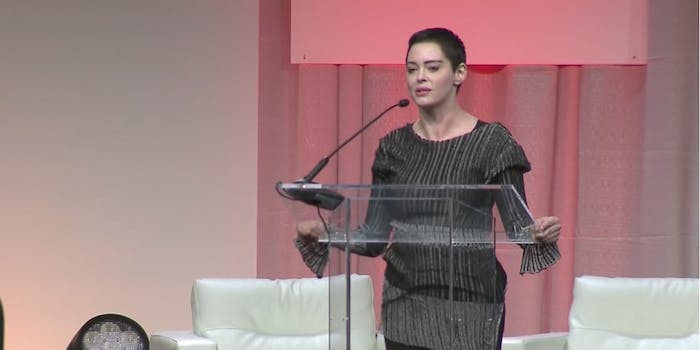 Rose McGowan on arrest warrant for drug charge: ‘A load of horses**t’

The arrest warrant stems from a personal item she left behind in Washington, D.C. testing positive for narcotics.

An arrest warrant in Washington, D.C. has been issued for Rose McGowan after narcotics were allegedly found on a personal item she left at Dulles International Airport earlier this year.

The drug charge, which would be a felony, resulted after a flight McGowan took into Washington, D.C. on Jan. 20 where she was in attendance for the Women’s March. According to Metropolitan Washington Airports Authority Police Department spokesperson Rob Yingling, the police department found “traces of a substance that was later identified as a narcotic” after McGowan left an item behind.

“Her personal belongings that were left behind from a flight arriving on Jan. 20 tested positive for narcotics,” Yingling told Deadline. “Our police have attempted to contact Ms. McGowan so that she can appear in a Loudoun County Virginia court to respond to the charge.”

The warrant for McGowan’s arrest, which has been entered into a national database, was first issued on Feb. 1, though the public is only learning about it now.

McGowan responded to news of the warrant and asked if police were trying to silence her. She later commented “FACT” to a tweet suggesting the reason that arrest warrant came out now was because McGowan refused to take hush money from Harvey Weinstein for her silence ahead of the first waves of allegations against him. McGowan alleges that Weinstein raped her in 1997.

Are they trying to silence me? There is a warrant out for my arrest in Virginia. What a load of HORSESHIT.