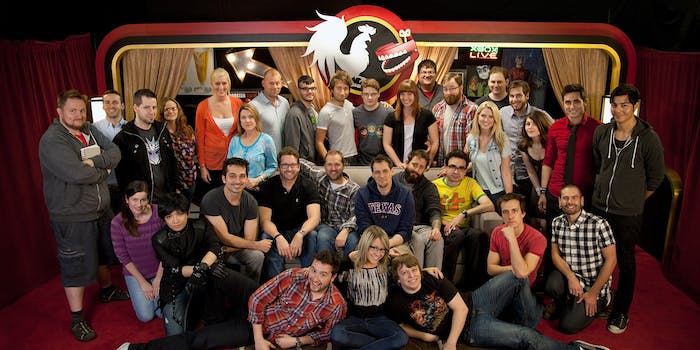 In just three days, it's already the second most successful Indiegogo film of all time.

After just three days, Rooster Teeth has raised over $1 million on Indiegogo to fund its first-ever feature film.

The Austin-based YouTube network behind Red vs. Blue launched the campaign on June 6 to fund Lazer Team, a live-action, sci-fi comedy about finding a signal from outer space and the aftermath of a secret team interpreting that message.

With an initial goal of $650,000, Rooster Teeth cofounder Burnie Burns told YouTube subscribers that Lazer Team was a project he and Rooster Teeth had been working on for a long time.

“We’ve been working on Lazer Team for years now, waiting to get to the point where Rooster Teeth could grow as a company to actually make that movie,” he said. He explained that it was a project that could only be made with the help of the fans, and the funds would help cover visual effects, cast and crew salaries, and shoots in multiple locations.

Well, the fans listened. Rooster Teeth reached its original goal in under 10 hours and broke Indiegogo’s record for the fastest film campaign to reach $700,000. In three days, Lazer Team flew past the $1 million mark thanks to more than 13,000 backers.

Rooster Teeth has been amazed by the fans’ response to Lazer Team.

We are floored by the support and generosity of our fans and friends. $1,000,000 in 53 hours. #LazerTeam #BestCommunityEver

“The dedication of our community over the last eleven years has been amazing. Their support over the last two days has been absolutely humbling,” Burns said in a press release. “Nothing short of awe inspiring. I am so proud to be a part of this group of people, and I look forward to even bigger milestones during the next 28 days of this campaign.”

Update: This story has been updated to clarify the nature of Jimmy Wong’s webseries, Video Game High School.