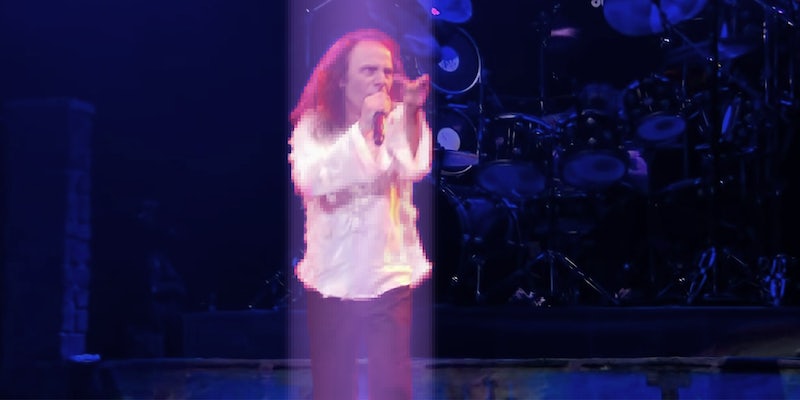 This is just metal nostalgia, driven to its logical conclusion.

May 16, 2010, was one of the worst days in metal history. That’s when legendary singer and force of goodwill Ronnie James Dio passed away after battling stomach cancer. Just a month before, Type O Negative singer and bassist Peter Steele died of a heart attack. With every genre casualty since—we’re still recovering from Motörhead icon Lemmy Kilmister’s passing late last year—metal has been staring down its own mortality.

Last week at Wacken Open Air, Germany’s largest metal festival, Dio got the hologram treatment. “He” performed “We Rock” with Dio Disciples, made up of former bandmates that tour to pay tribute to their fallen leader. The hologram looks like one of those wax statues you’d see at a Vegas tourist trap, but really, that’s maybe 1 percent of the concern.

The hologram, a product of Eyellusion Tech, will be a recurring entertainment experience and may go on tour next year. His widow, Wendy Dio, told Rolling Stone that she cried the first time she saw it. So did we.

It’s impossible to overstate Dio’s contributions to metal: He revitalized Black Sabbath with Heaven and Hell and The Mob Rules, he gave us the devil horns, he gave us Holy Diver. Dio was not just an exceptional singer, he carried a positive image as metal’s wise uncle. “Don’t Talk to Strangers” sounded corny coming from your parents; he made it the word, and you damn well didn’t hop in that van. For someone whose stage name literally meant “God,” arrogance was never a part of his act, and his stature only grew after his death.

This is just metal nostalgia driven to its logical conclusion.

One of the most unfortunate realities of metal lasting for more than four decades is that, yes, plenty of fans are stuck in their ways. Dio is a comforting and familiar presence for fans who tuned out of newer bands when Nirvana hit. They can think back to when they had hair and skinny jeans and no mortgages and a sixth sense for finding parties with abundant PBR.

It’ll be the ’80s again, when Dio was somehow a Budweiser spokesperson on the radio, because there was no limit to what a Metal God could do. The Disciples’ mere existence shows this catering didn’t appear out of nowhere; now they can travel with an effigy. It’s not like Dio was immune to this when he was alive—his Black Sabbath lineup reformed under Heaven and Hell in the mid-2000s—but they at least got some good tours and a decent album out of it.

The holograms will never truly capture Dio, just like they never capture what we loved about our heroes.

He had a storied career long before joining Rainbow in the mid-’70s, playing in the Vegas Kings, who eventually became Ronnie and the Rumblers and Ronnie and the Redcaps. The first name was the most appropriate, since it brings crushed velvet suits to mind more than dragons and chains. Even as a metal superstar, he had that classic showman quality that didn’t feel forced; it was sincere schmaltz. Hedonism ruled the scene around him, but he was committed to professionalism, letting fans down the worst sin of all. When he thanked you for coming out, you felt as though he came to you personally and meant it.

A hologram might be able to replicate his best screams—it can’t make you feel like you’re one of Dio’s own. There won’t be the sense that whether the demons you face are mythical or real, he’ll have your back. Cashing in on your emotions so shamelessly isn’t what he was about. There was no one like him, and we should be happy he was around when he was.

Save your money and blast Last in Line at home.