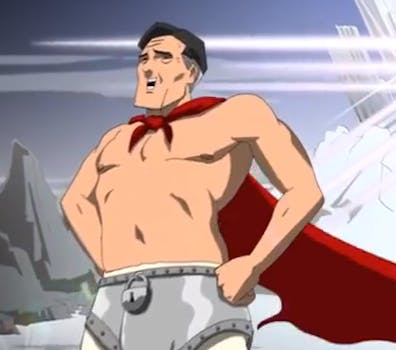 Romney raps in hilarious parody—”Where You Hide Your Money”

Who says you actually have to rock the vote? Right now, Mitt Romney’s fixing to rap it.

Such a proclamation comes in the wake of our first witnessing “Where You Hide Your Money,” a two-minute bite on Ol’ Dirty Bastard’s “Got Your Money” that posits Mitt Romney as a Cayman Islands-residing booty shaker with a silver single-shot pistol in his hand and a woman on each arm.

The track, which comes from Fox’s Animation Domination High-Def and is absolutely appealing enough to warrant a repeat listen, is decidedly against the former Massachusetts governor’s much-maligned policies on things like gun control and taxing the rich.

“I get props from my main man Roger [Ailes, Fox News’ CEO],” Romney raps, “because he’s a fellow draft dodger. Born rich, I won the lotto. ‘Corporations are people’s my motto.”

A slanderous Mitt Romney rap hosted by a division of the same company that owns Fox News. Who says that modern media’s still biased?