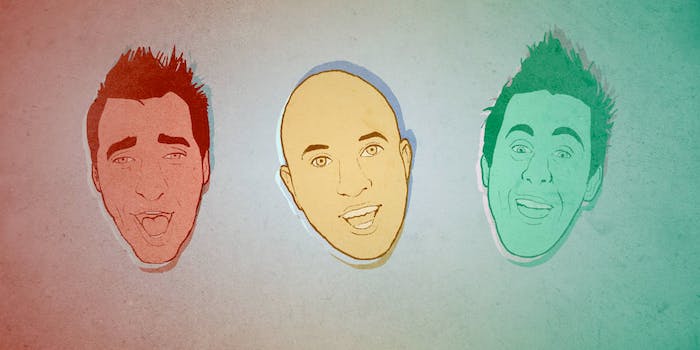 Making a movie like ‘Natural Born Pranksters’ is serious business

For all the jokes, in the highly saturated world of pranks, getting it right is serious business.

The whole thing could be one giant prank.

At least that’s the way you feel when talking to YouTubers Roman Atwood, Dennis Roady, and Vitaly Zdorovetskiy, especially when you can’t see their faces. Their film, Natural Born Pranksters, premieres April 1, and they’re in publicity mode. They started a phoner with the Daily Dot making diarrhea jokes, joking about their pants being off, and coolly stating that their favorite website is every website but mine.

But for all the jokes, in the highly saturated world of pranks, getting it right is serious business.

“There was massive amounts of planning to create something completely original,” explained Atwood. “There were definitely a lot of times where we went, ‘Oh we can’t do that, we’ve seen something like that before.’ Obviously in this genre it’s hard to be original, but we really did try to make this something nobody’s ever seen before.”

The trio, who boast more than 28.2 million collective subscribers, sat together for months, often welcoming guest writers from other prank projects like Punk’d to their ranks to help develop concepts. That came full circle when the group celebrated the film’s release at the premiere.

“The whole thing was just surreal and a little blurry, actually,” said Atwood. We had people showing up that we went and saw their movies premiere, like Steve-O. Guys we’ve always looked up to showing their support.”

“It felt like we got a blessing from the people that inspired us to be doing what we’re doing today,” continued Roady. “To have them come to our movie premiere, it was a big step. It’s something outside of YouTube.”

The process to create Natural Born Pranksters took two years, and unlike on their YouTube accounts, their best ideas were subjected to the perils of insurance and the legal department.

“We had 400 pranks that we came up with, but then we had to whittle those down to the ones we really loved,” said Roady. “On top of that, we had to get those approved by the legal department. Once we got our pranks figured out, we knew exactly what we were doing. It took two years to create the movie, from the writing process to getting production set to getting our schedules in sync.”

“I wanted to find a girl who would use me for money, like a gold digger video,” explained Zdorovetskiy of a concept that would follow a girl who didn’t want to date him until she saw a fancy car. He wanted to take it to the next level. “I want to do a private jet one, where I tell her ‘Let’s go to Vegas on a private jet.’ Then I jump out of a plane with a parachute and say, ‘I don’t like gold diggers.’”

To up the ante, Zdorovetskiy wanted the plane to then drop the woman off in Alaska.

“Aside from legal reasons, the plane also cost more than our entire movie,” laughed Atwood.

Aside from fiscal constraints, the trio also had to be cognizant of pranks that walk the line of acceptability. Pranking culture has come under fire within the YouTube community for issues of legality, especially in cases of sexual misconduct. Their response to the naysayers who don’t like prank culture is swift and to the point.

“I just upload another one,” quips Roady.

“Like Dory says in Finding Nemo, just keep swimming,” philosophizes Atwood. “The fastest way to fail is please everyone. We just move forward.”

“The people that hate it are actually the ones watching every single day, so I appreciate it,” laughs Zdorovetskiy.

For the film, they’re just as ambivalent about how their fans and non-fans react.

“This movie is a roller coaster ride,” said Roady. “It’s full of emotions and feelings. They’re going to be grossed out, they’re going to be laughing their butt off, they may be offended, they’ll think ‘This is great!’ The takeaway is whatever one they feel the most about.”

They culture of pranking isn’t just under fire from outsiders, either: A flood of new creators into the pranking waters has also contributed to the issues in the genre.

“When we started, we were pretty much the pioneers of the shock-and-awe kind of pranks,” Roady explained. “We didn’t have any real competition. We were able to do what we do and keep it safe and keep it right on the line and not cross it so much. Fast forward a couple years later, everybody is jumping in on the platform and they have to stand out. So they’re doing a little more extreme, a little more crazy. You look at them and wonder, ‘How did you get away with this, that’s super illegal.’ They’re just doing it to capture some eyeballs.”

To break back out of the pack, the crew knows they need to evolve, adapt, and capture new opportunities. Roady sees himself as an action film star.

“I’ll be doing big movies with Lionsgate, action stuff,” he said. “And still have the YouTube presence. I don’t think I’ll be doing a whole lot more prank movies in my future.”

Atwood says his next move is retreating to a remote island.

“I actually just purchased a small Island south of Australia,” he deadpans. “I’ll be out there in three weeks. Taking my kids and I’m out.”

For all I know, that could be real—or it could be his next great prank setup. There’s only one way to find out.