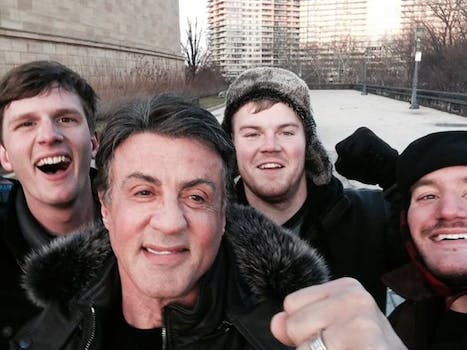 3 fans run into the real-life Rocky at the top of the Philadelphia Art Museum.

How can you spot a tourist in Philadelphia?

One easy way to tell the difference between a visitor and a local is that a native son of the City of Brotherly Love would never be caught dead racing up the steps of the Philadelphia Art Museum like Rocky Balboa. But, if you’re an out-of-towner—as Pete Rowe, from Strasburg, Pa., discovered—knock yourself out.

And, speaking of knocking yourself out, to the surprise of Rowe and his two buddies from California, when they reached the summit, they heard a voice comment on the speed at which they dashed up the 72 stone steps. While he didn’t say “Yo Adrian,” the words came from Rocky star Sylvester Stallone. As one might expect, a selfie chronicled the meetings between Stallone and his three fans. The serendipitous meeting went viral after Rowe’s father posted it on Facebook.

For those who have never seen the film, the scene of Rocky Balboa running up the Philadelphia Art Museum steps as part of his training (along with pounding a side of beef) is the film’s signature moment.

Stallone was in Philadelphia filing the seventh in the Rocky series (a cheesesteak to anyone who can name the prior six) in which the underdog fighter takes on the role of trainer to Apollo Creed’s grandson. The actor made his way around the city in between filming, with fans quick to snap pictures and shoot video of his appearances.

The original film debuted in 1976, winning the Academy Award for Best Picture. The series has been a cash cow for the three studios that have produced the films—with a total budget for all six totalling $109 million the films have grossed a combined $1.1 billion. That said, the last few made their way to video moments after they were released to the big screen.

By the way, Stallone is not a native Philadelphian (he is from New York), so he is welcome to run the museum steps anytime he wants without ridicule.