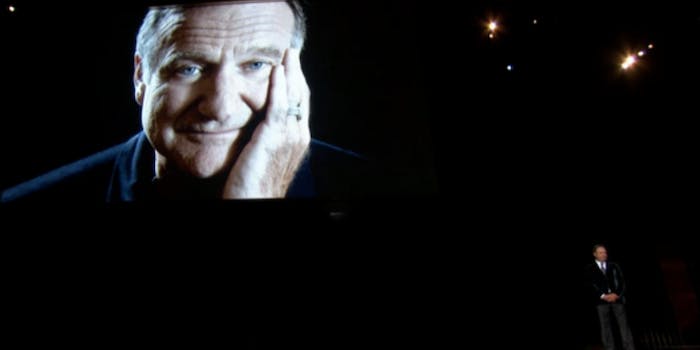 There was not a dry eye in the house as Williams was honored.

Hands-down the biggest tearjerker moment of the Emmys this year was not any award-winners’ speech, but Billy Crystal’s moving tribute to Robin Williams.

Williams was found dead in his California home earlier this month at the age of 63.

While many luminaries of the television industry passed away this year, including Phillip Seymour Hoffman and Paul Walker, Williams’s death caused waves online at incomprable levels. Crystal memorialized him during the ceremony in a moving speech that highlighted Williams’s ability to be comedic anywhere and everywhere.

“He made us laugh, big time,” Crystal said. “It’s so hard to talk about him in the past, because he was so present in all of our lives.” He continued:

For almost 40 years he was the brightest in the comedy galaxy. But while some of the brightest of our celestial bodies are actually exinct now, their energy long since cooled. But miraculously, because they float in the heavens so far away from us now, their beautiful light will continue to shine on us forever. And the glow will be so bright, and it will warm your heart and make your eyes glisten, and you’ll think to yourselves, ‘Robin Williams, what a concept.’

Screengrab via The Emmys