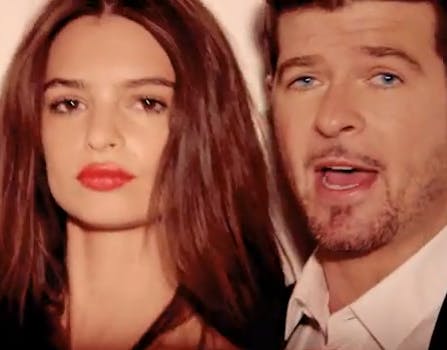 In addition to Pharrell and the six other wayward boobs, the "Blurred Lines" also features a banjo and a goat.

Those are all the seconds within the first 20 seconds of Robin Thicke’s new music video “Blurred Lines” in which there’s very obvious nudity going on among Pharrell (just kidding) and a few attractive women, one of which appears very comfortable holding a goat.

Posted to YouTube yesterday, the song has more than 17,000 views and has somehow managed to remain online despite its incessant disregard of YouTube’s anti-nudity Community Guidelines.

In addition to Pharrell and the six other wayward boobs, the video also features a banjo; the rapper TI; a typically suave Thicke, who at times will appear eating an ice cream cone; a hilariously grandiose syringe; one of those big foam #1 hands; and an extra-tall stationary bicycle.

There’s also this image, which comes at the 3:14 mark and forever can’t be unseen. 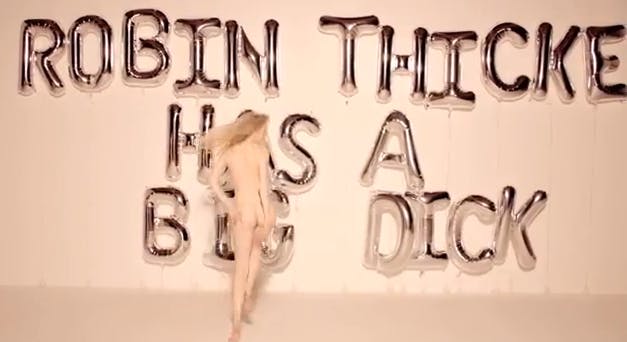 Robin Thicke is not at all a no-name artist, and this video currently streams from his main YouTube channel, which has more than 3.3 million views so far. (His VEVO channel offers a second iteration, one that’s running pre-video ads and contains considerably fewer boobs.)

It’s really only a matter of time before YouTube drops in and cuts this booby brigade offline, but until then… Robin Thicke’s “Blurred Lines,” ladies and gentlemen.

UPDATE: As expected, YouTube has removed the original upload of the video. However, the full, NSFW version is still up on a VEVO account.