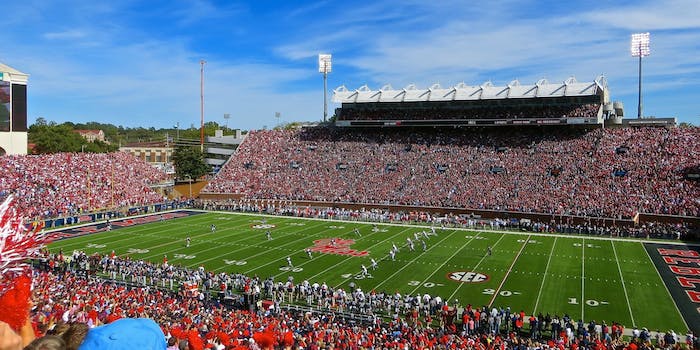 Could the deleted message board post affect a high stakes college football game?

You can’t blame Tennessee fans for doing their part.

Saturday, No. 3-ranked Ole Miss is slated to rough up the middling Tennessee Volunteers when both schools meet on the gridiron. In an effort to bridge the talent gap, a Vol fan posting as “CM8888” started a thread on fan blog Volquest.com called, “Pic of Robert Nkemdiche hitting a bong, no idea how to post.” In it, he posted a Snapchat of what appeared to be Nkemdiche hitting a bong.

The thread has since been deleted. According to Fox Sports, the user admitted that he had obtained the photo in August, and was purposefully waiting until this week to disseminate it.

Nkemdiche was the Rivals.com High School Junior of the Year in 2011, and remains the highest-ranked prospect Ole Miss has landed this century. The valiant trolling coup by the Tennessee fan forced Ole Miss coach Hugh Freeze to comment on the circulating, incriminating photo.

“I’m very aware of the picture and also when it was taken and where it was taken. We test our entire team on our drug-testing policy at the beginning of the season and then we have our follow-up tests throughout the course of the year. I’m super confident we handled each one the same and we enforce our policy very consistently,” Freeze told the Clarion-Ledger, “There’s not a single thing that goes on that I don’t always bring to our athletic director (Ross Bjork) to talk about and make sure we’re being very consistent with that.”

According to the Clarion-Ledger, It’s unlikely that Nkemdiche will face disciplinary action that involves missing time in uniform. Basically, the school’s drug policy doesn’t budget in any sort of mandatory, first-offense suspension so why on earth would Freeze build one in personally? This is basically the coach’s present conundrum with respect to his stud starter:

ole miss has gotta figure out how to seem like they care about that nkemdiche picture without, yanno, actually doing anything.

But it sure beats playing underhanded. As for the Volunteers, they can expect a swift and incensed clinic from the Rebels  when the two schools meet Saturday night in Oxford, Miss.