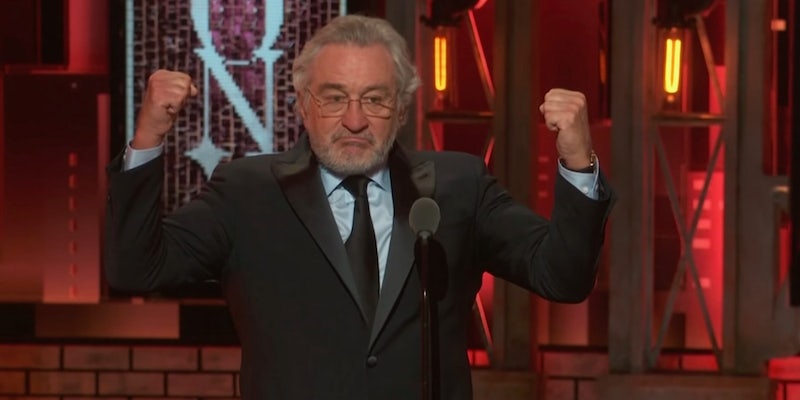 Robert De Niro slams Trump with expletives at the Tonys

He got a standing ovation—and censored by CBS.

Robert De Niro tested CBS’ censors at the Tony Awards Sunday night after he kicked off his appearance with an expletive statement that garnered a standing ovation—and initially confused those watching the U.S. feeds of the ceremony.

During the third hour of the Tony Awards, De Niro appeared onstage to introduce his friend Bruce Springsteen. But instead of launching into that introduction, which included a joke about how it was easier to get tickets to Hamilton than Springsteen on Broadway, De Niro went into a different direction.

The applause from within the room was instantaneous as many began to stand up and cheer for De Niro for several seconds. De Niro took it all in as he raised his fists multiple times.

“It’s no longer down with Trump, it’s fuck Trump,” he added, which got even more applause.

For many viewers outside of the U.S., the moment aired uncensored. The Hollywood Reporter’s Rhett Bartlett shared video from the Australian feed of the Tony Awards with De Niro’s full remarks.

Even as De Niro went back on script, his tribute to Springsteen praised the singer and highlighted Springsteen’s political involvement.

“Bruce, you can rock the house like nobody else,” De Niro said. “And even more important, in these perilous times, you rock the vote, always fighting for, in your own words, ‘Truth, transparency, and integrity in government.’ Boy, do we need that now. So congratulations for your Tony for Springsteen on Broadway, or as I like to call it, Jersey Boy.”