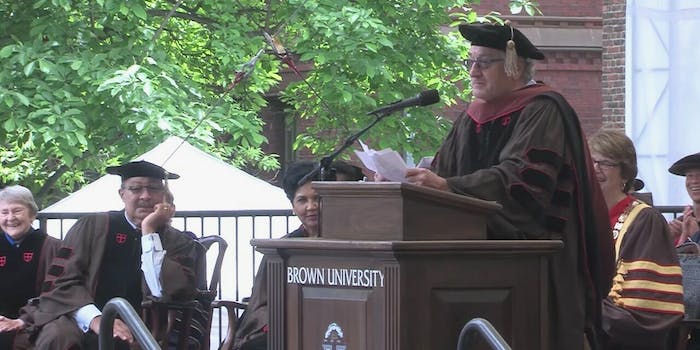 Robert De Niro took a swipe at the state of the country under its current leadership during a commencement address, comparing it to a “tragic, dumbass comedy.”

He spoke to graduating students and their friends and family in attendance at Brown University’s commencement ceremony on Sunday. While some of these addresses tend to be optimistic from the get-go, De Niro started on a darker note as he asked the students, “Are you sure you want to do this?”

The U.S. has become a much different country since Brown students started attending, De Niro noted. So much so that it’s completely changed genres, cinematically speaking.

“Well, the country’s gone crazy,” De Niro said. “In movie terms, when you started school the country was an inspiring, uplifting drama. You’re graduating into a tragic, dumbass comedy. My advice is to lock the Van Wickle Gates and stay here.”

Although his comment about locking the gates was made in jest, he charged the students who were leaving Brown to make the world a better place.

“But if you do leave, work for the change,” he added. “Work to stop the insanity. Start now so the Class of 2018 will graduate into a better world. It won’t be easy but you’ll figure it out.”

Brown has yet to post De Niro’s commencement speech on its own, but you can find it in the commencement ceremony video, which starts around the 30:31 mark.