'They roll harder than you.'

The three teenagers that form the Japanese metal band Babymetal are making waves in the U.S. They’re headlining a tour in this country for the first time, and after making an appearance on The Late Show With Stephen Colbert and playing the metal-friendly Carolina Rebellion festival last weekend, the band’s combination of thrash metal and J-pop has divided those fans who enjoy headbanging.

Some love Babymetal and some do not (and others are simply confused).

But for those people who believe that Babymetal is unfit to perform, long-respected metal singer Rob Zombie has taken to Facebook to defend his colleagues. After he posted a picture of himself posing with Babymetal on his Facebook page, one fan lambasted him. Those comments eventually were deleted, but they live on in screenshots. 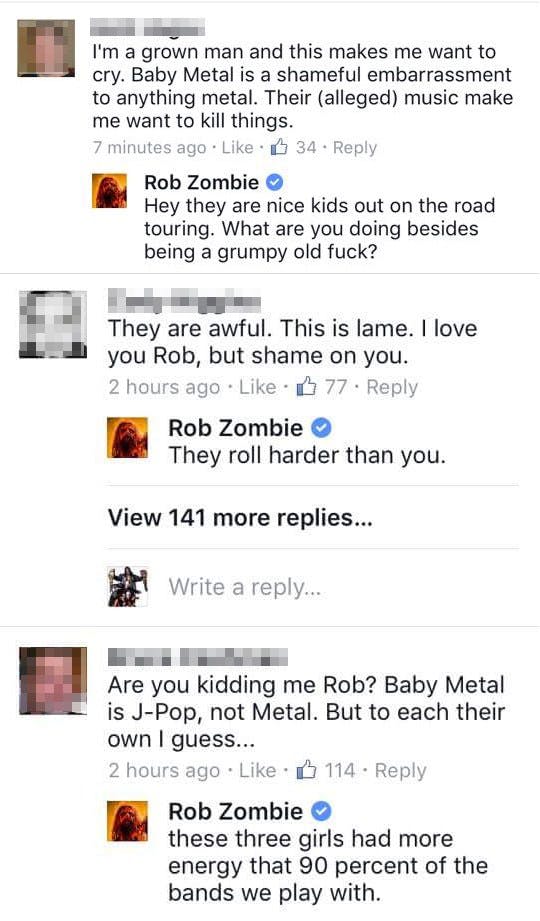 The reason Rob Zombie had to defend the band? Some fans, it would seem, don’t enjoy the pageantry, the costumes, and the synchronized dancing that Babymetal brings to the stage. Simply put, some wouldn’t categorize this as metal (although, let’s remember, there’s nothing in this world that’s less metal than thrash band Testament selling air freshener on its website).

“There’s so many things about Babymetal you cannot just grasp with the sound,” Suzuka Nakamoto (also known as Su-metal) told the Daily Dot last month. “The visual has to complement the sound, the costumes have to complement the sound. The sound is already a mixture of everything and it could get overwhelming, but if you come to a concert that’s where you get to watch the whole package. The only place to find out what Babymetal is about and what Babymetal aims to do, you have to come out to a show.”

Plenty of American fans have been doing that lately, and Babymetal’s popularity is undeniable. After all, the band has broken 50 million YouTube views with its “Gimme Chocolate” video.

Yet, the band is aware that its music doesn’t please everyone—and it also seems to understand why.

“Su-metal says that this is the exact same reaction that they had toward metal,” an interpreter for the band recently told Noisey. “For them, when they first heard metal they were like, ‘Oh my God, what is this?’ It was scary, dark, loud, just something that was alien to them. And that’s probably the same perception that metal fans have towards Babymetal: it is alien to them. No metal band is dancing on stage to metal music, no metal band is wearing what they wear on stage, no metal band is making music like Babymetal.”

But if one is still confused about whether to love or hate, welcome or seek and destroy the band, there are only two questions that truly need to be answered. Does Babymetal rock? And if so, does it rock hard?

The answer to both questions is an uncomplicated (and an undeniable) yes.