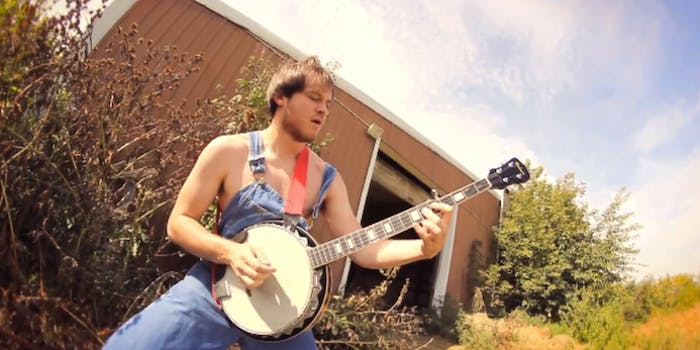 Meet the guy who made a Slayer banjo cover go viral

Just wait for his solo.

Back in May, Rob Scallon released a cover of Slayer’s “Raining Blood” on the banjo. It racked up more than 3 million views.

Scallon’s fond of covering of metal songs on unlikely instruments: He’s also done System of a Down’s “Chop Suey” on the cello, and Cannibal Corpse’s “Frantic Disembowelment” on the ukulele. His most recent cover was another Slayer song, “Angel of Death,” on the banjo. It debuted Oct. 3 and has more than 250,000 views. On his YouTube page, Scallon simply says, “I play guitar for the Internet.”

Billboard recently interviewed Scallon about how he makes money from YouTube, specifically in relation to his covers:

I’m partnered with Google so that revenue is split between YouTube and I. And in the case of the covers — this is actually pretty new, you weren’t able to do this prior — there’s a three-way rev-split that makes monetizing covers possible. So with these Slayer covers, for example, the revenue from those ads is split between Google, Slayer’s management, and myself. So everyone’s happy.

The last “Raining Blood” cover had Slayer trending on Facebook, which I was really happy about. They make money, I make money, YouTube makes money. And there’s also the song sales, which are kind of a new thing. I don’t really know how that’s gonna turn out yet because it’s really delayed, but for that I go through a company… they handle all the legal stuff so Slayer gets their proper royalties and then I can also sell the cover on iTunes.

Scallon currently plays in a band with VlogBrother Hank Green, as well as another band, Driftless Pony Club, that’s also made up of YouTubers. But he tells Billboard he’s not that interested in being in a “legitimate band.” He’s just happy playing guitar for the Internet.