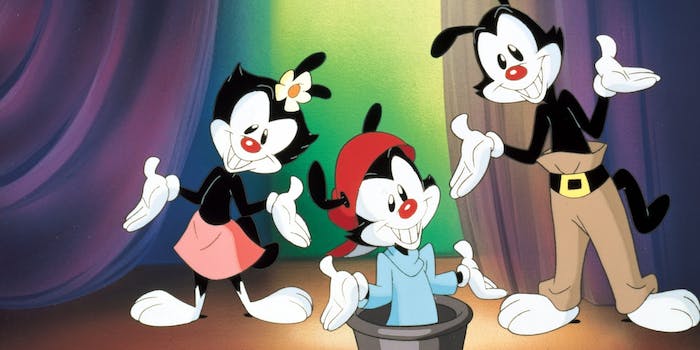 The maps might have changed, but the tune's catchiness hasn't.

Voice actor extraordinaire Rob Paulsen entertained a crowd—and tickled its collective nostalgic bone—with a unique address at the Geek Fan Expo in Detroit. He strayed from what most personalities do at convention Q&As (plug upcoming projects while not disclosing any details about them), reached deep into his rich past of voice acting work, and sang “The Nations of the World” from Animaniacs.

For those of you unaware, Animaniacs was a brilliant cartoon program that aired in the 1990s, featuring “rejected” Warner Bros. siblings Yakko, Wakko, and Dot wreaking havoc on the movie studio. Yakko was brought to life by the ever-versatile Paulsen for the series’ entire five-season run.

Among Animaniacs’ numerous entertainment offerings were a series of original songs, many of which were educational in nature. One such tune was “Yakko’s World.”

And here is Paulsen, 22 years after the episode’s original 1992 airdate, revisiting the melody.

Maybe next we can get Paulsen to enact an argument between Donatello (from the new Teenage Mutant Ninja Turtles series) and Raphael (from the 1987 TMNT series), seeing as how he voices both characters.