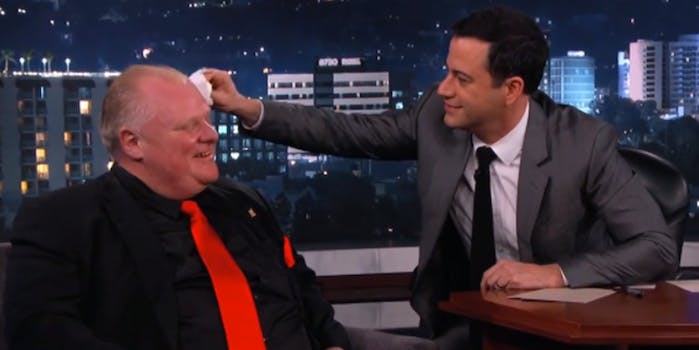 “I wasn’t elected to be perfect."

The Toronto mayor has been on media tour to pump some air into his flailing Tube Man of a re-election campaign, and last night, he appeared on Jimmy Kimmel Live. Ford was his own unique weather event, known as the sweatstorm. As soon as his butt hit the seat, Kimmel began reading Facebook comments from fans about Ford’s appearance on the show. Is it possible for Ford’s face to turn a deeper shade of beet red? Yes.

Kimmel then coached Ford on his controversial videos of the past, like one of him throwing candy canes at children, and the Mayor looked supremely uncomfortable. Kimmel then got serious, and asked Ford if he needs professional help for his drinking problem. “I wasn’t elected to be perfect,” he responded, deflecting the question.

Much of Ford’s interview sounded like that of a man in denial of many problems in his life. Kimmel’s a master level troll, and could have given Ford the verbal excoriation we all want to see. Kimmel did some mid-level trolling, but Ford didn’t do much to keep up. The whole segment felt a bit sad. Thankfully, the next guest was Gonzo from The Muppet Show.