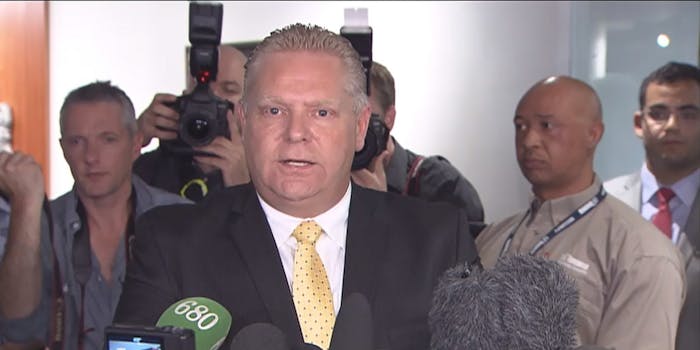 Would you watch the Rob Ford webseries?

The mayor of Toronto wants to be a video star. Intentionally, this time.

Toronto Mayor Rob Ford and his brother, Councillor Doug Ford, are taking transforming their former TV show into a webseries.

Doug Ford sat down for an interview with local radio station CFRB 1010 Thursday night and revealed that they had received pitches from “everyone from Oprah to Dr. Phil” about making a reality show.

Instead, they decided to do it themselves.

The new series, called Ford Nation, will feature Rob and Doug discussing topics openly in a talk show format and is set to premiere sometime before Christmas.

The brothers had previously hosted a radio program on CFRB 1010 called The City with Mayor Rob Ford, which aired weekly until Mayor Ford admitted to smoking crack cocaine on Nov. 5.

They’ve named their new series after their previous foray into TV, a weekly one-hour program produced by Sun News Network. The one and only episode of Ford Nation aired on Nov. 18. It was canceled less than 24 hours later, despite record ratings for the network.

According to Sun News vice president Kory Teneycke, the economics of the show didn’t work, and just one episode used as “as many resources as we would use for 8 hours of daytime programming.”

This time around, the Ford brothers are funding everything out of their own pocket.