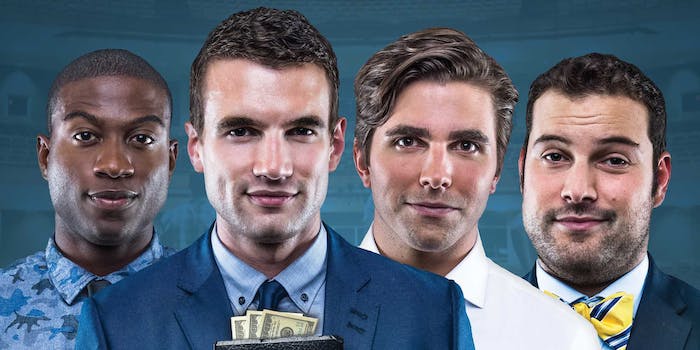 For Riot Studios, the Sept. 26 multiplatform release of its feature film Believe Me is not the big story. Well, it might be, but what is far more novel is that the Austin-based production company hopes to create an army of for-profit marketing whisperers on social media to spread the word in advance of opening day.

“I think there are a lot of people trying to leverage social media where you can earn points or chips or these fake currencies and redeem them for money,” producer Alex Carroll told the Daily Dot. “We decided we wanted to be more direct and make it super simple. We’re paying fans, even motivating them, to do what fans do: to tell their friends. What better way to hear about a new movie?”

The process is super simple. Fans go to team.believemefilm.com and register. After a quick confirmation email, each fan is assigned a unique link that he or she can add it to their social media network of choice and add a few words of encouragement to grab their friends’ attention. For each click-through, the ad-hoc marketers earn 10 cents. If someone clicks and pre-pays for a DVD ($9.99) or video on demand ($12.95), that link is worth 25 cents.

The approach makes sense for Riot Films, which operates on a limited budget. The film cost $1.1 million to produce, and its marketing budget pales in comparison to most film studios. So while the film will have a relatively robust distribution for its opening (14-16 cities including New York and Los Angeles), that’s nothing resembling debut week for a typical studio blockbuster. Seeing a smaller theatrical distribution window as an opportunity rather than an obstacle, Carroll explains Believe Me will come out simultaneously in theaters, on DVD, and on digital download. With that strategy, Riot Films’ precious marketing dollars can be leveraged across multiple consumer touchpoints.

“If they don’t have a theater near you that is showing the film, you might wait and forget to see it  it, so we don’t want to miss out on that point of sale,” Carroll adds.

Believe Me is not your typical low-budget film. It stars Alex Russell (Chronicle) as a college student whose scholarship comes to an end and who schemes to raise money by becoming a faux evangelist on a national tour. The film costars young actors Miles Fisher, Johanna Braddy, and Zachary Knighton along with veteran actors Nick Offerman (Parks and Recreation) and Christopher McDonald (best known as Shooter McGavin in Happy Gilmore).