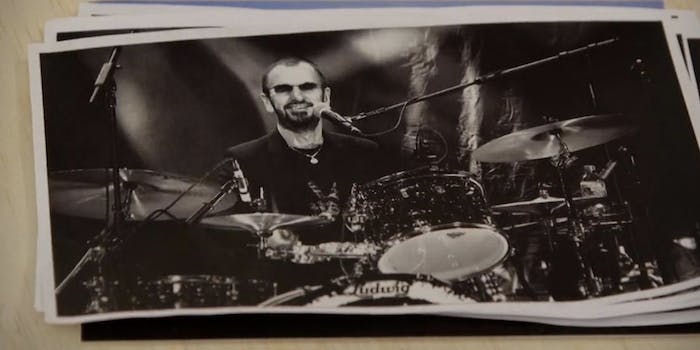 The iconic drummer pays tribute to his career as a member of the best band ever.

Ringo Starr’s new video, “Postcards from Paradise,” is enough to bring tears to any Beatles fan.

For the former Beatles drummer, and one of two surviving band members, “Postcards” is a five-minute love letter honoring the remarkable string of hits from the original Fab Four as well as his solo performances. Using simple animation, a series of postcards move across the screen, each containing pieces of song titles or lines from songs made famous by the Liverpool lads. I stopped at 18 such lyrical trips down memory lane before I became misty-eyed.

Since the Beatles breakup, Starr’s musical career has smoothly motored along with solo hits (“Photograph,” “It Don’t Come Easy”), many of which are backed by a series of all-star bands. His current such assembly of talent includes Steve Lukather (Toto), Todd Rundgren, Gregg Rolie (Santana), Richard Page (Mister, Mister), and Gregg Bissonette (ELO). Adding to the fun, Starr told colleagues he would be recording at home, and if they wanted to join in, they should stop on by. Joe Walsh, Peter Frampton, Dave Stewart, and Amy Keys took him up on the invite.

Starr’s new album (his 18th post-Beatles) was produced to honor the drummer’s April 18 entry into the Rock ‘n’ Roll Hall of Fame as a solo artist. The Beatles were inducted in 1988 (same year as The Beach Boys, Supremes, and Bob Dylan). John Lennon and Paul McCartney were inducted as solo performers in 1994 with George Harrison entering the hall in 2004