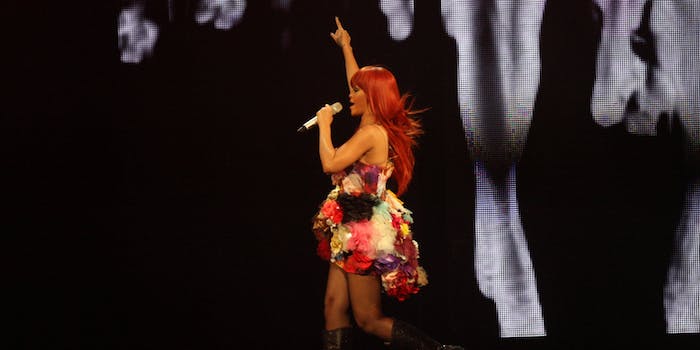 Even tweets from one of the world's biggest pop stars have consequences.

CBS pulled Rihanna from its Thursday Night Football broadcast entirely after she blasted the company on Twitter for taking her out of last Thursday’s game.

Last Thursday, CBS Sports decided to remove Rihanna’s “Run This Town” and narration from Don Cheadle from the program, instead focusing on coverage about former Baltimore Ravens player Ray Rice’s suspension and domestic violence. At the time, CBS Sports chairman Sean McManus told Sports Illustrated that they “needed to have the appropriate tone and coverage.”

Many weren’t thrilled about the choice to have Rihanna, who is a survivor of domestic violence, perform before the Ravens game before CBS ultimately canceled it, but she wasn’t exactly thrilled about being pulled off the schedule only put it back into the lineup the following week.

She didn’t hold back earlier Tuesday on Twitter as she lashed out at CBS to her more than 37 million followers.

CBS you pulled my song last week, now you wanna slide it back in this Thursday? NO, Fuck you! Y’all are sad for penalizing me for this.

However, her verbal attack on CBS didn’t come without its own consequences. Shortly after she posted the tweets, CBS announced that it was removing Rihanna from Thursday Night Football entirely, and said in a statement that it was “moving in a different direction” and getting different theme music to play prior to the game.

There’s no word yet on who will be Rihanna’s replacement.