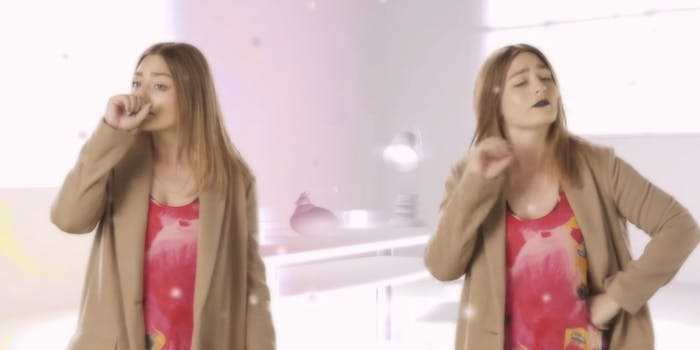 'There’s something really insidious and uncomfortable about the branded content proposition.'

A “branded content sitcom” that pokes fun at the world of influencer marketing and sponsored integrations could only be funded by one thing: a brand.

“As a brand, we really believe in supporting female artists with outspoken viewpoints, who are disrupting and calling into question cultural norms,” explained BB Dakota Creative Director Katharine Brandes. Instead of simply investing in digital influencers and bloggers to promote her brand, Brandes gave control to Casey Jane to conceptualize an original series.

Ellison has made a name for herself combining the world of art and comedy, starting out as a standup then turning to performance and visual art projects like digital animation performances for MOCA.  She’s also tackled the fashion world before, with her series What the F*shion? for VFiles, where she poked fun at design trends. She’s uniquely poised to turn branded fashion content on its head with this new project.

In the new BB Dakota series, Casey Jane loses her job, has a spat with her incredibly tall roommate, goes to the gynecologist, and throws a killer house party—all while her right and left brain are competing for attention and control. Most importantly, she’s always wearing BB Dakota and always takes the time to drop the name with a pointed look straight at the camera.

“There’s something really insidious and uncomfortable about the branded content proposition,” said Brandes. “It entertains you and draws you in, only to advertise you. But it lives in a space between entertainment and commercial. Now we’re living in a world where there’s all types of distribution where you don’t know if you’ve being advertised to or entertained or both.”

The series is BB Dakota’s second effort to shake up the world of fashion marketing. They previously partnered with Petra Collins on a documentary series.

“It seems like there isn’t a lot of creative thinking going on with how to market to people in fashion,” Brandes said. “A lot of the fashion brands just go after the same 10 bloggers. I don’t really want to support that. I don’t think that’s contributing to culture in any kind of interesting way. I’m hoping that’s a bubble that bursts.”

The series is one good step towards dismantling the world of branded content, but they’ve got a long way to fight. For YouTubers and influencers, brand deals are the best paychecks they can get, especially during the in-between time when they’re big enough to drive some traffic, but not so huge that they’re inking a book deal. The Right & Left Brains of Casey Jane’s hits both marks as a piece of actual art and an effective way to showcase the brand’s fashion and attitude, but not every company has the wherewithal to invest in a more elaborate video presence beyond sending clothes to fashionable women with more than a million viewers. Plus, there’s only so much Ellison to go around, and out of her capable hands, you might not find the same pointed results.

“I’d rather support artists who are doing interesting things,” concluded Brandes. “Casey Jane’s work, I think it will have more lasting implications than any of this fashion blogger stuff, so I’m proud to be a part of it.”

All six episodes of the series live on BB Dakota’s YouTube page.