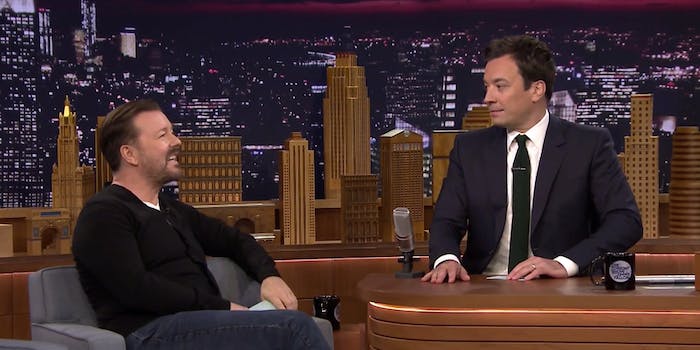 Jimmy Fallon and Ricky Gervais are terrible at this word game

In this game of words, nobody wins.

There’s really no way to throw “gerbils” or “spandex” casually into a conversation, but dammit if Ricky Gervais and Jimmy Fallon won’t try their hardest anyway.

The two played a game of “Word Sneak” on The Tonight Show, in which they each had to insert five random words into the conversation so that they wouldn’t be able to tell what words the other had. Naturally, the words could hardly be thrown into discussions in which they were relevant.

It’s a conversation that goes nowhere, and the duo fail spectacularly at hiding their words from each other—something that tends to happen when Fallon tries to hide something—but it’s worth it alone for that discussion on Richard Gere, gerbils, and Keanu Reeves.