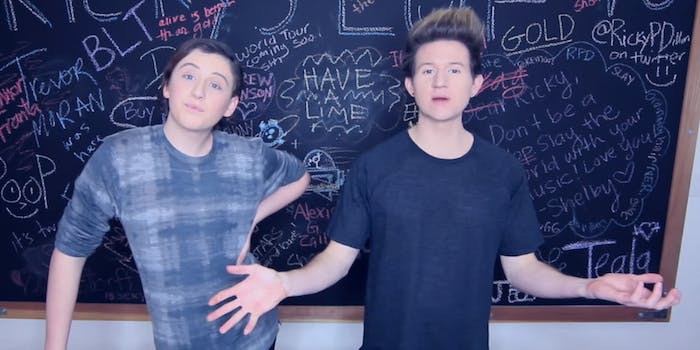 The duo will hit 13 cities in support of their new albums.

Two YouTube stars who have both launched their own musical careers are hitting the road together. Ricky Dillon and Trevor Moran, who formerly co-starred as two members of the YouTube supergroup Our2ndLife (O2L), will perform songs from their respective albums during a 19-day tour that will begin on Feb. 23 and will hit 13 U.S. cities along the way.

The tour’s title, “Alive/Gold,” refers to each of the latest albums of each of its headliners. Moran’s second EP, Alive, became available for digital download on Jan. 22, while Dillon’s debut LP, G O L D, arrived a week earlier on the 15th (and featured a guest appearance from Snoop Dogg to boot).

After skyrocketing to digital fame as members of O2L, Dillon and Moran now have millions of subscribers on their personal channels, where they share music videos, post vlogs, and occasionally collaborate with one another. Moran also provided guest vocals on “Steal the Show,” a track from Dillon’s new album.

The “Alive/Gold” tour will begin with a show in Cambridge, Massachusetts, on Feb. 23 and will cross the eastern half of the U.S. before concluding in Minneapolis on March 12. “Music has always been a passion of mine, so being able to perform live and celebrate the release of G O L D with my fans is an amazing opportunity,” said Dillon. “I can’t wait to team up with my longtime friend Trevor for the Alive/Gold tour!”

Tickets for the tour, as well as a full schedule, are available on its website. For superfans, VIP packages are also available. They include meet-and-greet sessions with the tour’s two stars.