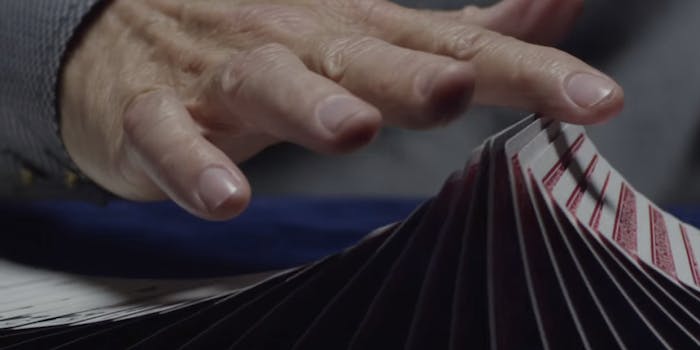 “He refused to be like any ol’ other blind person. He actually did stuff that he really shouldn’t have done.”

“He refused to be like any ol’ other blind person. He actually did stuff that he really shouldn’t have done.”

This is how magician Richard Turner is described in the trailer for Dealt on the documentary’s Indiegogo page, and it’s an understatement. Turner, whose vision began fading at a young age after having scarlet fever, had 20/400 vision by the age of 13. In high school, he practiced Wado Kai karate, sparring against opponents that weren’t legally blind and earning a fifth-degree black belt. At the point that his vision became nothing more than dim shadows in his periphery, he became one of the world’s top card magicians, a level he remains at today.

Dealt seeks to tell Turner’s “seemingly impossibl[e] journey,” and according to director Luke Korem, the project is currently three-fourths complete, as the crew has followed Turner around for a year, now, traveling to 13 cities and conducting over 40 interviews.

But things have gotten a bit more interesting since then—and a bit more expensive: Turner’s been asked to perform in Sweden, South Korea, and China, and those performances would make for some great footage, but are going to be pricey trips for a film crew to make. Plus, the licensing fees for archival footage featuring Turner are adding up quickly. The documentary’s Indiegogo campaign for $75,000 is currently sitting at 54 percent completion with three days to go.

The rewards packages are pretty good, ranging from the $25 donation’s digital download of the finished film to the $1,000 donation that comes with autographed versions of just about everything on Earth. Things get really interesting at the $7,500 level, though: Turner will perform for up to 30 people at your house. For anybody with tons of money, this is the exact kind of thing you should do with it. Show somebody the slow-motion footage of the master at work, watch the awe come over them, and then casually mention that the guy’s performing at your apartment next Wednesday. After all, stunts like that are why people bother collecting money in the first place.

As it’s an Indiegogo campaign, not all is lost if the overall goal isn’t met. But a trip to one or two of those countries, and some of that priceless archival footage, might be.