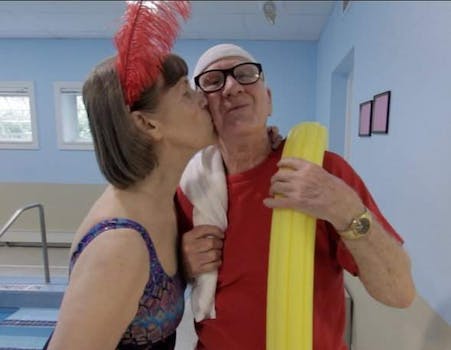 Don’t ever let any one tell you that old people can’t have fun or be cool on the Internet.

Don’t ever let any one tell you that old people can’t have fun or be cool on the Internet.

Case in point, the Clark Retirement Community in West Michigan.

Last week, the Clark Retirement Community uploaded a video of their residents acting out and mouthing the words to Michael Bublé’s “I’m feeling good” on the Internet. While the video didn’t hit viral status (still under 400,000 views to date), news sources such as CBS, NPR, FOX News,  Good Morning America, The Today’s Show, Inside Edition, were among reputable (even global) outlets that flocked to the video.

The Clark Retirement Community lip-dub video—a format in which lip-synching performers are filmed, with audio dubbed over the clip, often done in a single take—was a joint effort with the film and video production department at Grand Valley State University in West Michigan. But it was more than a university project. The Clark residents say they’ll be “feeling good” about their lip dub for a long time.

Mary Stokoe, who holds a pine car air freshener in the cafe scene of the lip dub, says of the press: “It has been overwhelming and very exciting, but I think the nicest part was that we heard from children and grandchildren. Some people have heard from friends that they hadn’t heard from in 10 – 15 years – that recognized us from the video.”

Jane Brierley, the marketing and admissions director at Clark, got the idea to do a lip dub after watching the Grand Rapids lip dub, saying; “Darn, why can’t we do that here at Clark?”

Brierley describes working with Grand Valley as “a marriage made in heaven,” but it was also  a whole “community effort, because people from West Michigan are like that.”  When Brierley says it was a community effort – she means it.

Grand Valley students were in charge of getting small businesses in the community to lend tuxedos, instruments, costumes, plants, etc because Brierley’s budget for the entire project was a measly 2,500.

“So we do feel it was a community success” says Brierley.  “Some of the e-mails we’ve been getting have said things like ‘We’re so proud to live in Grand Rapids’.”

Gail, who described herself as a “family member of a resident” during the Daily Dot conference call, stresses the lipdub really brought the community together: “what I’ve been hearing in my neighborhood was how much fun all the college kids had being over here and interacting with all the residents.”

The residents enjoyed the students just as much during the months of rehearsals. Brierley overheard a resident ask “can we adopt you?”, and Mary Stokoe admitted  “we got very fond of them by the end.”

“These college kids became our mentors.” says Mary’s husband, Bill Stokoe (also in the cafe scene). “These students were professionals, and everybody felt that”

Rehearsals began in April, and happened almost bi-weekly in two hour long sessions — two hours because, as Josephine “Jo” Kiel jokes; “ that’s the limit for our energy” (Jo Kiel played the woman in red in the casino scene).  At which Brierley chimes in with: “people were sleeping real well here afterward”.

As for the actual filming, Jo Kiel explained the energy level in the retirement community was high for a good week before the final shoot, with 100 of the roughly 500 residents participating. (Jerry, Jo Kiel’s husband, described his feelings towards the whole experience as “ecstatic.”)

For many residents, the video also recalled a former life. All the residents playing instruments are actually musicians. The painter in the lip dub is painter Harry Booth.

One resident, dishes Mary Stokoe, was a former theater actress“written about in many newspapers, and she kept telling us about her write-ups. She couldn’t understand why the camera man went so fast by her, she couldn’t finish all her lines.”

Bill, Mary Stokoe’s husband, adds “She said it was the smallest part she had ever had.”

Given all the excitement stirred up during the entire process, it’s no wonder some of the 400 residents that didn’t participate now wish they did.

Mary Stokoe shared a story of a concert pianist friend who was enthusiastic about the lip dub until she found out she only had to look like she was playing, not actually play the piano.

“Another friend said that she was afraid they were making fun of us, and she did not think that was right, and she did not want to be embarrassed so she pulled [out] completely. After she saw the lip dub she admitted she was sorry she had not been part of it.”

Jo Klein has a happier tale of a reformed naysayer: ”one of my neighbors thought it was going to be a failure and she didn’t want any part in it. While we were filming, after she saw how it was going, she jumped right in in the back. She’s wearing a decorated hat, so she’s pretty noticeable too.”

It’s no secret that part of the media excitement and success around the Clark Retirement Home Community lip dub is due to the juxtaposition of the song and the age of the residents; the lyrics to “I’m feeling good” take on a whole new meaning when they’re coming from someone closer to 100 than 50 years old.

“I am 82 years old, and I don’t feel old. I still feel like I have a lot of things that I want to do, and that’s one thing we all feel here. We’re not just sitting here waiting for the end. We’re not old, we’re just getting older” says Mary Skokoe.

Jerry, Jo Klein’s husband, agrees with Mary Skokoe, adding ”my wife and I both just reached the 90 year mark, and we both feel like we still got a lot of living left.”

Brierley went on to explain that the lyrics of the song, especially the refrain “I’m feeling good” has become an inside joke among the residents when they’re asked about their day.

We kind of feel like, we’re aging, so let’s celebrate! We can be gloom and doom,  or it can be a fun, positive thing.  And we chose fun.”

So much fun, in fact, that this Daily Dotter (and possibly many others who enjoyed this video) is now rethinking her fear of aging.