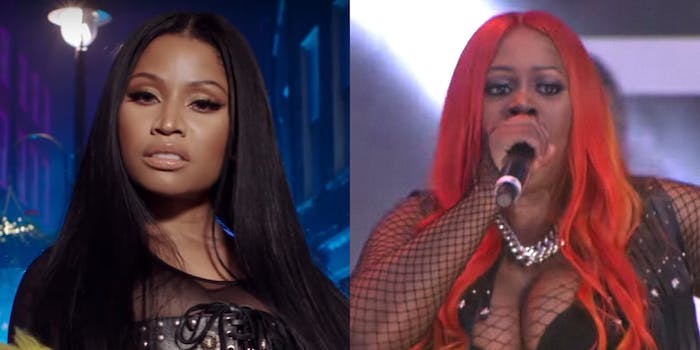 Remy Ma, Nicki Minaj, and the scuffle for the throne

There can only be one queen of rap.

Think you’re smelling some summer backyard barbecue? That might just be the fresh beef between Remy Ma and Nicki Minaj served this weekend.

On Sunday Remy Ma gave the Hot 97 Summer Jam crowd a sweltering performance in the New York summer heat. The Bronx native surprised everyone when she brought out a few friends including Lil’ Kim, Cardi B, and Queen Latifah to perform Latifah’s ’90s hit “U.N.I.T.Y.”

But there was one female rapper notably left out of this unity celebration. Following the performance, Ma performed “shEther,” her diss track to Minaj, while images of Minaj were projected behind her. After a quiet spring some might have assumed that the beef between the two was a thing of the past—but the fight for the queen of rap throne appears to only be warming up.

If you don’t know Remy Ma, she’s a former Terror Squad rapper whose career launched shortly before Minaj’s. The group’s Grammy nomination for “Lean Back” put her on the map, before she was put behind bars in 2007 after shooting her friend Makeeda Barnes-Joseph over a money dispute.

It seems like this beef is fresh, since a lot of the Twitter buzz came after Remy Ma released her seven-minute Minaj diss “shEther” in February, named after its sample of Nas’ “Ether.” But the decade-long feud started before we had Twitter fingers. In 2007 Minaj released a freestyle track called “Dirty Money” where she attacks Remy Ma. In 2008 Remy Ma was sent to jail while Minaj joined Young Money Records, becoming a global superstar in the process.

In 2014 Remy Ma was released from prison and the two seemed to be cool, with Remy Ma doing multiple features on different Minaj tracks. But there can only be one queen.

Subtle jabs on tracks turned what some considered a fake friendship or a frenemy situation into reignited beef on both sides—with Minaj attacking Remy Ma in her features on Jason Derulo’s “Swalla” and Gucci’s “Make Love,” and Remy Ma responding with the aforementioned “shEther.” Along the way Remy Ma accused Minaj of having a ghostwriter, and even butt implants.

Minaj responded to “shEther” with “No Frauds,” which did little to impress the Twittersphere, but reestablished Minaj’s ties to her home base, Young Money Records, with longtime co-workers Lil Wayne and Drake along for good measure.

Last week Minaj made it clear she wasn’t finished with her feud during her verse on a leaked 2 Chainz track called “Realize.” She claims that Remy Ma’s husband, rapper Papoose, actually wrote “shEther.”

This weekend, perhaps in response to Minaj’s verse or as a pre-planned, full-scale attack, Remy Ma put up large photos of Minaj memes and videos comparing her to Whoopi Goldberg while performing “shEther.”

Rap beef happens all the time, but this feud goes beyond our love of drama.

The space for women in rap is finally expanding. Remy Ma showed us that—before her performance of “shEther” that is—by bringing out ‘90s legends at the same time as up-and-comers like Cardi B and Young M.A.

But the battle for the top spot is going to be contested and fought for with a mix of ego, longing for publicity, and in the competitive nature of hip-hop. If Minaj’s success is a mansion protected by a gate and neighborhood guards, Remy Ma is knocking.

With the leaked “Realize” track, Remy Ma’s “Mask Off” remix, and the Summer Jam warning shots, it’s clear to everyone that this beef, after years of cooking, is not leaving the grill anytime soon. The best we can hope for is that it comes with a side of good rap music.