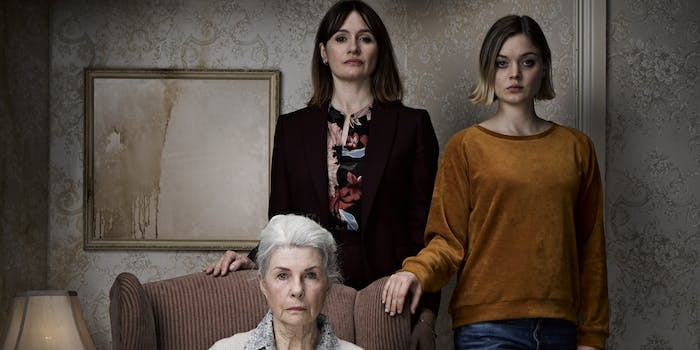 In ‘Relic,’ an exciting new voice in horror emerges

'Relic' is an intense film—and one destined for a small but devoted following.

Natalie Erika James’ directorial debut Relic is a slow-burn thriller that boils over into visceral horror. It’s the kind of movie that worms its way under your skin and once it’s there, you can’t shake it. After premiering at Sundance back in January, Relic was set for a festival run that would’ve helped build buzz for its theatrical release.

Amid the coronavirus pandemic, Relic opened via limited theatrical run last week before hitting VOD this weekend. Regardless of the film’s bumpy road to release, it’s now time to take notice. Relic is a strong first film and James is a director you need to put on your radar.

Relic is a film about dementia and the toll it takes on a person, on a mother and daughter, on a whole bloodline. Whether you’re familiar with the effects of dementia from real life or from the movies, Relic’s depiction of the disease is primal. Relic is pure horror, made scarier by the fact that its antagonist is unbeatable. The script, which James co-wrote with Christian White, is psychologically rich. There’s something for everyone here, something that will put the fear of God in you because nothing is scarier than real life.

Emily Mortimer plays Kay, a woman returning to visit her mother. Kay brings along her daughter Sam (Bella Heathcote), and both women are unaware of the wolf awaiting them. Grandma Edna (Robyn Nevin), is nowhere to be seen and her house is falling apart. Amid the mess and mold, Kay and Sam find notes all over. These reminders range from mundane (“turn off tap”), to mysterious (“don’t follow it”), to heartbreaking (“I am loved”). When Edna turns up after a few days, her condition is as bad as her home’s. The metaphor is obvious but effective.

The fear here is presented as a two-way street, particularly when filtered through Kay’s perspective. She sees what’s happening to her mother and gets a look at her potential future. When Kay looks at Sam, the fear is magnified. Will Sam have to witness Kay fall ill? Or, worse, will Kay have to watch Sam suffer like Edna is? From Edna’s perspective, the sense of everything slipping away from her only makes her actions more erratic. The way Edna’s disease manifests made me think about someone realizing they’re being erased from existence. Her memory falters and fades, she’s dissipating and in her fleeting lucidity, she recognizes it. It’s crushing.

There’s a shot of Edna, Kay, and Sam lying in bed together that distills everything the film is working toward into one image and it’s breathtaking. There’s a lifetime’s worth of hope, love, loss, inevitability, and terror, all crammed together in that frame. James displays a sharp eye for provocative imagery. Relic is full of indelible shots, but that’s the best one in the film.

As the film builds tension during its first hour, there are hints that there may be supernatural things taking place. There are foreboding nightmares, mysterious noises in the home, and enough odd touches to make you think something else may be in play. To me, it felt like false hope. I wanted there to be another explanation, something these women could solve and fix. But that’s not how life works. There’s a scene in the third act that feels like a nod to Jonathan Glazer’s immaculate Under the Skin, a shared image that captures how fundamentally alone we all are in the end.

Relic should have hit theaters riding a wave of successful festival screenings and good reviews. While it’s been denied the former, it’s earned the latter. Now that it’s available on VOD, hopefully, it finds its audience. Relic is an intense film and one destined for a small but devoted following. There are a lot of strong releases hitting VOD and streaming this week, but Relic is the top option. I can’t wait to see how Natalie Erika James follows this up.

‘Relic’ is now available to rent on VOD