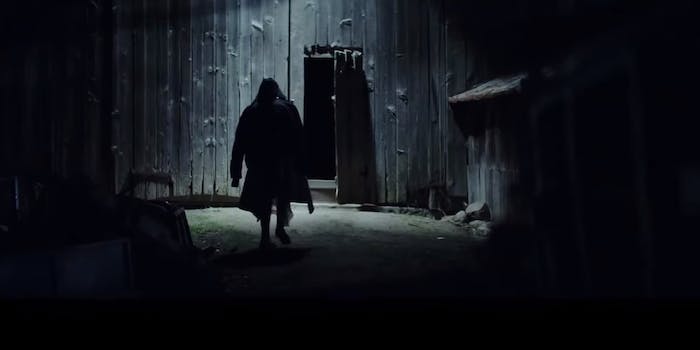 In which Remus Lupin attempts to recover Hermione's repressed memories of Voldemort.

If the new trailer for Alejandro Amenabar’s Regression is any indication, we’ve only just reached peak Inception influence.

The new film sees Ethan Hawke and David Thewlis attempting to regress a confused and teary Emma Watson in order to find the truth about a mystery involving terrifying homicdal strangers in black masks and dark robes.

In other words, Remus Lupin gives Ethan Hawke a Time Turner to uncover Hermione‘s torture at the hands of the local Death Eater collective. Look, we didn’t write this plot.

The attempt at unlocking her memories is eerily similar to Inception‘s famous mind invasion tricks, with shadows of The Sixth Sense and Shutter Island thrown in. Tortured, shabbily dressed protagonist? Check. Playing mentor to a confused younger woman? Check. Spooky hints that protagonist’s brushes with reality may be deceptive? Check.

Still, all that could be forgiven as recycled plot tropes if it weren’t for the trailer’s liberal copying of the Inception trailer. Just because every trailer has copied the Inception trailer for the last five years doesn’t mean you need to go BWAHHHMing up your film when the plot is already begging comparisons.

Although the film’s trailer doesn’t tell us much—OK, really anything—about the plot, director Alejandro Amenabar (The Others, Abre Los Ojos) thrives on this kind of slow-paced, tense, atmospheric thriller. We’re not sure what tricks he has up his sleeve, but who are we kidding? We saw Inception like eight times, we’ll see this, too.