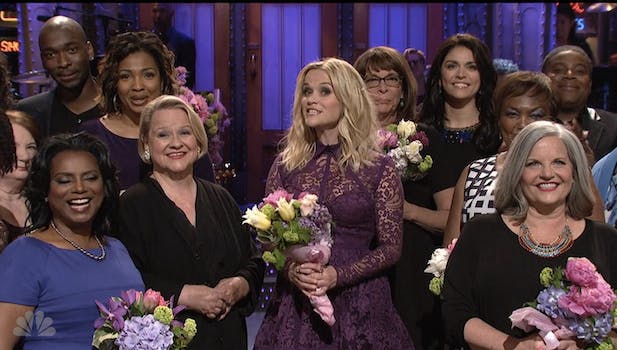 Mother's Day on national TV is the best time to say, 'I'm sorry.'

Reese Witherspoon’s best moment on Saturday Night Live this week was a perfect mix of touching and funny, and came during her monologue.

In honor of Mother’s Day, Witherspoon explained that she was “a real nightmare from the ages of 5 to 37” before inviting cast members on stage with their real moms to apologize for actual things that had happened in the past.

The parade included Sasheer Zamata apologizing for slapping a girl and making her mom pay to fix her victim’s broken glasses and Beck Bennett admitting to his mom that he used a vibrating squiggle pen she purchased for him for “sexually experimenting.”

Of course, the moms got a chance for their own revenge, showing a reel of embarrassing footage of their kids that included teenage Aidy Bryant singing Britney Spears and Cecily Strong doing a play as a cocaine addict. The only person who got off relatively easy is Keenan Thompson, whose teenage years were already public knowledge from his time on Nickelodeon.