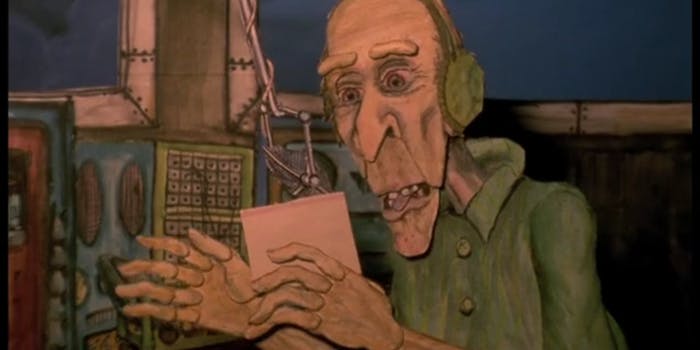 This stop-motion project, 12 years in the making, is becoming a hit on Reddit.

For more than a decade art professor Christopher Sullivan has labored in the basement of his small Chicago home with a set of paper cutouts and a 16mm camera.

It took him 12 years to make the film, working in relative obscurity 25 hours and sometimes 40 hours a week.

And yet within one day the film’s trailer had been view nearly 100,000 times.

Sullivan calls the film “a social service Pittsburghy tale about three characters uncovering their past and present.”

But on Reddit, it’s another story: reddditors loved it.

It shot to the top of the site’s r/videos section, collecting hundreds of largely positive reviews.

“That was lovely and haunting at the same time,” redditor wigglesworth wrote. “I love the details on each character. You can see their inner struggles and deamons. Its quite beautiful, the leaves falling up from the trees, the tragedy and sadness painted though the scenes.”

Sullivan is a professor of animation and film at the School of the Art Institute of Chicago. He’s been creating experimental films (like this one) for over 30 years. His subject matter is often dark, surreal, and melancholic: This stuff is no Hollywood animated yarn.

“I’m interested in showing both the troubles and the hopes of ordinary people, as they try to negotiate love and belonging in their lives,” Sullivan told the Daily Dot by email. “In all of my work, I am interested in personal positions of power in the family, where I feel most social structures originate.”

He said the attention from Reddit was “exciting” — both the positives and negatives (redditors really, really didn’t like the title font). “It makes me feel really hopeful for the film that people who have no idea who I am are responding,” he wrote.

Few have seen Sullivan’s full length film. That won’t happen until after the festival season.

“The way I have always felt about this film is that if I get it right it will work,” Sullivan wrote, “but if I make the wrong turn it will crumble.”

But if the reaction to his trailer is any indication, he’s made all the right turns so far. All it took was 12 years.