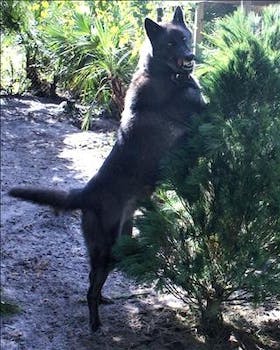 A young woman's unlikely friendship with a wolf has made her a hero on Reddit. But this wolf is not insane.

Being friends with a wolf in real life may have its benefits, especially when that mammal has a striking resemblance to a slightly more famous, crazed wolf that no one in their right mind would want to mess with.

Photos of Yuki have become popular on Reddit over the last day or so, in part due to the similarity the mammal has with Insanity Wolf, a meme that’s often seen on the social news site and elsewhere on the Web. The path that led to Yuki becoming a Web celebrity, however, was a fraught one.

He was bred in captivity and sold to be kept as a pet. Yuki had several different owners as a puppy and was abused. He was abandoned and was going to be euthanized at an animal shelter before he was rescued by Shy Wolf Sanctuary in Naples, FL, where he now lives with a wolfdog named Bella.

Christa, a biology major and volunteer at the sanctuary, posted photos of herself and the wolf to Reddit, where they hit the front page of the site.

“I started volunteering at Shy Wolf Sanctuary when I turned eighteen, two and half years ago (you have to be eighteen to volunteer),” Christa told the Daily Dot via private message. “I think [Yuki] was about 1.5 years old when I was introduced to him and he immediately liked me, as he does most young female volunteers. I clean his enclosure and sometimes just visit with him. He’s super goofy and very affectionate and talkative.”

The first time Christa stumbled across Insanity Wolf, she thought the wolf in the meme looked like Yuki. She’s never been fearful of Yuki, “but since he was abused he does get upset and will bite people. He’s always very relaxed, happy, and goofy when I spend time with him, and so am I. I feel safer with wolves than with people, especially Yuki because he’s very protective of me.”

When she’s home from college in the winter and summer, Christa tries to volunteer at the sanctuary every day it’s open. “The people and animals there are all amazing and there’s no place I’d rather spend my time,” said Christa, a sophomore at Colgate University in Hamilton, NY.

With a number of popular threads dedicated to Yuki on Reddit already, it seems forthewolfx has some competition in the lupine popularity stakes.