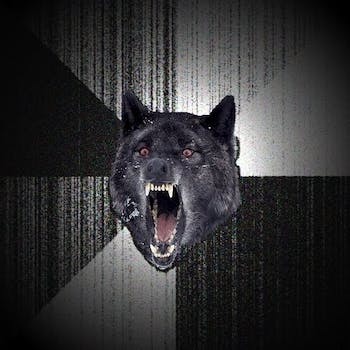 Turns out you’d have to be insane to win Reddit’s second annual Tournament of Memes.

For the past 40 days, the social news site’s favorite image macros having been duking it out in a battle of meme superiority in a subreddit created just for the occasion, r/TournamentOfMemes. The tournament, which most closely resembles the NCAA Men’s Basketball March Madness festivities—complete with betting—ended Thursday at midnight.

This morning, redditors awoke to find that everyone’s favorite unstable advice animal, Insanity Wolf, had come out on top.

Still, the challenge isn’t over yet. Now Insanity Wolf will go head to head with the 2011 champion, iconic loner Forever Alone, for the title of Ultimate Champion.

The true winner won’t be the meme itself, of course, but the redditor lucky enough to have set up his or her betting bracket most accurately. This person will win prizes donated by Reddit’s general manager, Erik Martin—12 months of Reddit gold and a Reddit sweatshirt.

The ultimate champion, and the winner of the prizes, will be announced Saturday.