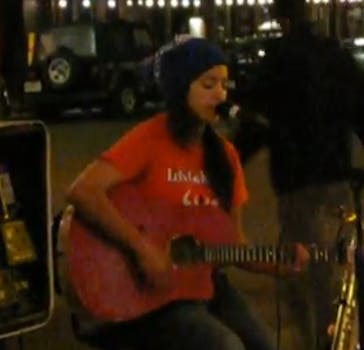 Thanks to some serious Reddit karma, a grainy video of Charlie Rae performing in downtown San Diego has garnered nearly 400,000 views on YouTube.

The story of a street performer being discovered on a sidewalk and catapulted into stardom is as old as Hollywood. Most recently, Once, the Oscar-winning indie film starring former busker Glen Hansard and his Swell Season cohort Markéta Irglová, was adapted for Broadway.

In the age of Reddit, that dream, however, can become a reality with a matter of upvotes—the social news site’s system for rating user-submitted content.

Late last week, Reddit discovered Charlie Rae, a struggling pop artist from San Diego. Seated in front of a bustling street, the young singer performs an acoustic version of her signature ballad, “What Do You Know,” with the steady hum of passing cars and skateboarders in the background.

The footage, captured on a cell phone, is distant, dark, and grainy, but in just over two minutes, Rae managed to win over Reddit, which has 35 million unique visitors a month. The aptly titled video, “Beautiful Musician on Sidewalk in Downtown San Diego,” uploaded June 13, quickly reached the site’s front page and has been viewed nearly 400,000 times to date.

On Monday, Rae returned the favor, taking part in a Reddit AMA (“ask me anything”) session, announced via YouTube. What resulted was a compelling portrait of an artist, humble and eager to explore to new possibilities.

A self-taught musician, Rae spent the better part of the last decade trying to make her name in Phoenix, Ariz. She opened up for the likes of Sheryl Crow and Michelle Branch—two obvious influences—and self-released a live album.

She relocated to San Diego to be closer to family and to see if she “could make a life out here,” Rae said in response to my Reddit comment.

For the last year and a half, making it has included everything from working at Jamba Juice and serving as a nanny to hostess jobs. She’s been in need of a break—something to warrant actually updating her website for.

“Someone emailed me and said my video was getting a bunch of views and I checked it and kinda freaked out,” Rae said.

A few producers and publishing companies have since reached out. More importantly, she’s tapped into an audience that’s eager to support her endeavors. Redditors created tribute art, locked down her own subreddit (r/charlierae), and showered her with questions and compliments in equal measure.

“You are wonderfully talented and I wish that you may harness the power of reddit/the internet to gain the recognition and fame that you have worked so hard to achieve,” danE3030 added.

To that end, Rae has pledged to perform as part of Global Reddit Meetup in San Diego on Saturday. But it’s worth noting her goal isn’t to stop performing on the street—quite the contrary.

“The thing is, whether or not people listen to my music, I also do it for the practice,” Rae said. “It has given me the confidence to play in such a capricious setting. … I never know what kind of crowd I will have. One day it will be well over 100 and on another it will be maybe only a few couples.

That sounds like a line right out of Hollywood.