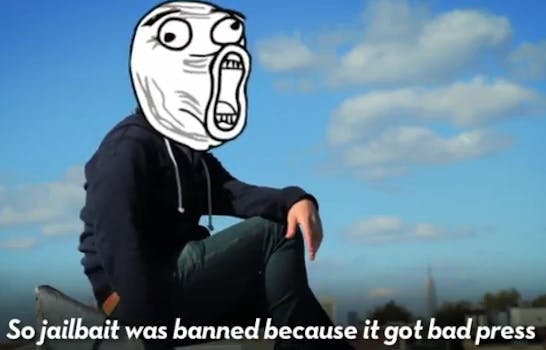 Occasional Daily Dot contributor Dave Holmes (fresh off composing our very own theme song) has taken his songify-the-news skills to Reddit. The video, made for Holmes’ new employer, tech site PandoDaily, stars rooftops and horrifying, animated rage faces. The song boils down Reddit’s entire history into just few lines and sneaks in a quick how-to guide. Take this, for example:

So jailbait was banned because it got bad press
Now everyone’s on Reddit even Mr. President
But just when it was on an unstoppable roll
Gawker exposed its most infamous troll

Get this man a Grammy! Or a Webby. Do they give those for Reddit rap songs? Regardless, Holmes’ work here will surely start the next great movement in hip hop. Expect Jay Z’s “Big Pinnin’” to drop later this year.

Here are the full lyrics so you can sing along at home:

The site’s divided into what’s called subreddits
Movies, sports, technology, and politics
There are many more on all types of things
From My Little Pony to spacedicks
By 2006 they’d made a big splash
And were bought by the publisher Conde Nast
Now that Reddit and New Yorker are on the same team
They shouldn’t have subreddits with barely-clothed teens
So jailbait was banned because it got bad press
Now everyone’s on reddit even Mr. President
But just when it was on an unstoppable roll
Gawker exposed its most infamous troll

Now it’s time to get his jam on Radio Reddit.