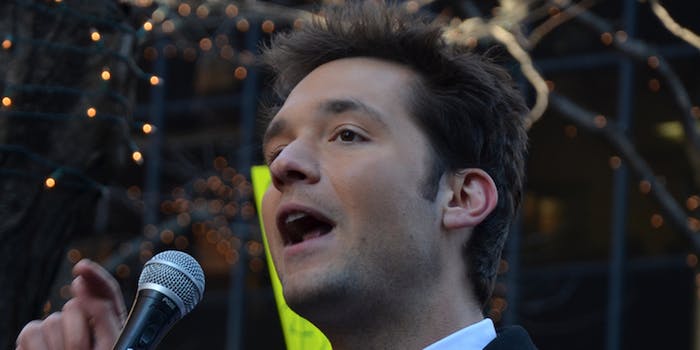 Alexis Ohanian’s dark prophecy: ‘We screwed up the Internet’

"I owe you an apology," writes the 29-year old Ohanian, who started Reddit in 2005, in an excerpt from his upcoming book.

In an excerpt published to social news site Reddit on Tuesday, company cofounder Alexis Ohanian gave a darkly prophetic warning about how encroachments on internet freedoms could have a myriad of negative social, economic, and political repercussions.

“I owe you an apology,” writes the 29-year old Ohanian, who started Reddit in 2005, in an excerpt from his upcoming book Without Their Permission: How the 21st Century Will Be Made, Not Managed. The passage takes the form of a college commencement speech delivered in the year 2025. “We screwed up the Internet, one of the world’s greatest innovations, and I’m truly sorry.”

He paints a bleak picture of a moribund economy rife with unemployment due to restrictive copyright laws that “put protecting Mickey Mouse on a higher pedestal than protecting the free market” and an omnipresent surveillance state where the government has unfettered access to everything that happens online.

Looking back from his future vantage point, Ohanian’s speech takes the form of an apology that’s effectively a call to action for the current generation of would-be activists worried about the long-term effects of placing restrictive corporate or government controls on the Internet. “Back when I finished my first book, Without Their Permission, I really thought we were going to make the right decisions, too,” he continued. “The open Internet, as a platform, used to embody so many of the highest ideals of this country. Our Internet was filled with the true spirit of innovation, entrepreneurship, helping yourself as well as others, and the freedom to connect whenever you want—as well as the right to privacy when you don’t. We could have been real role models for the world. Our bad, guys.”

Ohanian’s exhortation—aimed specifically at Reddit’s rapidly expanding legion of followers and, more generally, at all users who at least partially subscribe to Ohanian’s techno-libertarian ethos—comes at a crucial time for the site.

In recent years, Reddit, which by one estimate now counts 6 percent of all online adults as users, has become an online hub for political mobilization on issues ranging from proposed legislation that would have enforced what some saw as draconian intellectual property laws in the name of combating piracy and “net neutrality,” which would have allowed internet service providers to charge different rates for different types of content.

Largely thanks to a groundswell of popular outrage against these bills, generated in online communities like Reddit, all the legislation in question was defeated; however, there’s a prevalent fear among many of the redditors engaged in these issues on a near-daily basis that, without constant vigilance, the online ecosystem that presently allows for both the free flow of information and a flourishing economy of innovative startups is too fragile to survive on its own.

This plea for continued political engagement seems to be at the core of Ohanian’s argument. When he writes “we screwed up the internet,” that “we” isn’t just politicians or tech industry leaders like himself—it also includes everyone reading in 2013 that even remotely agrees with him. “I’m truly sorry,” he concludes with an apology to his imagined future generation of college graduates. “We had a great opportunity, but we failed, and now it’s you all, our future, who are left with the consequences. The irony isn’t lost on me—we all let it happen without your permission.”

Despite his grave warning, Ohanian insists this dour dystopia only comprises a short section of the full book, calling the rest, “nine chapters of optimism,” about the web’s ability to positively transform whole sectors of society from philanthropy to comedy—with an emphasis on Reddit favorites like Donorschoose.org (representing the former) and Zach Anner (representing the latter).

You can read the full text here or listen to an the excerpt of the audiobook: