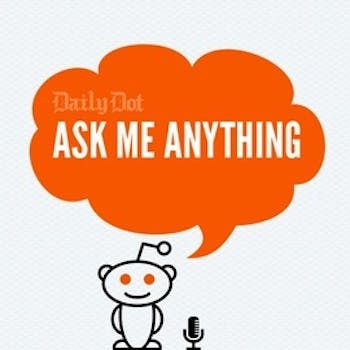 For your sake, the Daily Dot will not be presenting the highlights from Reddit's Ask Me Anything section in a slideshow of comments.

Louis C.K. did an AMA on Reddit yesterday, and it was kind of a big deal. Even the Huffington Post did an obnoxious slide show about it: 23 screen captures of Reddit comments.

Sure, that was fun. But don’t be blinded by the shining light of celebrity. There was a lot going on in AMAs this week that had nothing to do with fame and a lot to do with meth labs, drug dealers, and secret societies.

Q: The music in “Louis” is amazing. Are you a big jazz fan? Any current favorites? (velocitygirl77)

A. producing the music is maybe my favorite part of the whole thing. I go into a studio with Matt Kelmer and a handful of great musicians that work under the title “Sweet pro” and we just fuck around. I get to cheat and make music without the training. I ask them for different moods and sounds and they try it. or we’ll say let’s go with cello and piano for a while and try a few things there. The cello player, wish i fucking knew his name, is tremendous. he creates whole pieces by himself and I use them ALL.

Q: Do you still get nice royalties for “Eye of the Tiger”? (seablue)

A:  I call my house and studio “The place that Sylvester Stallone built.” I have been blessed by the song and rarely does a week go by when a request does not come in for a usage of the song for TV, commercial, or movie placement. So yes, it has been the gift that keeps on giving.

3. I am a cast member of The Adventures of Pete and Pete

Q: I was checking out the Pete & Pete cast on imdb a while ago and I came across this gem. “Was suspended from high school during senior year for setting his guitar on fire in the halls.” Is this true and why did you do it? (working_right_now)

A: It’s true. I was playing guitar, everyone was into Jimi hendrix, we were also teenage troublemakers, I think I used hairspray so it didn’t quite flame on but just smoldered. The disciplinary report at the time (I recall) read “…a guitar that was smoldering…”

4. IAMA 32 degree mason willing to say things I should not. AMAA.

Q: Why are masons so secretive? (sevaede)

A: Honestly, it’s about sharing a bond with each other. There are literally no secrets that I could reveal that are not readily found on the internet in about 100 different places. Masonry is about building friendship and fellowship with like minded individuals, and having ‘secret rituals’ builds that bond. If you were in the military of in a fraternity in college, or to some extent played sports in HS you understand the importance of these excercizes.

Q: Not to be cheeky, but why do you live like you’re in the 20’s? (lawlredditlawl)

A: No cheekiness taken. It’s a time period my wife and I enjoy very much. We still go out for drinks and dinners with friends at contemporary restaurants etc. My wife and I both thoroughly enjoy antiques, historic houses, vintage clothing. We actually got started into it swing dancing several years ago and our tastes progressed away from the late 1930s / 1940s to the 1920s/30s. Our close friends also live similar lifestyles ranging from the 1920s to the 1950s/1960s. We all have our favorite eras and tend to hang out at historic locations / night clubs when time allows.

6. I spent my teenage years in a meth lab ran by my father who was once a pastor (family now in prison) AMA

Q; When your whole family basically was on meth together, was it extremely tense and volatile? Did the meth cause fighting? You mentioned that your brother is in prison for murder. Did the meth have anything to do with it? How many of your family members are in prison? (oldspice75)

A: Me and my brother have almost beaten each other to death and sometimes he would be staring at me while i was sleeping (shitty to wake up to). Parents beat the shit out of each other and were always fighting because of the paranoid shit they would think of. Mom almost shot my brother. Mom and brother once kidnapped me because of the “speakers”. My brother’s homicide was two years before which spiraled my mom further into addiction bringing my dad and me with her. It had nothing to do with the family but did have to do with drugs. My brother my mother and my father are in prison. Those are the only family I had after we were pretty much kicked out of both sides of the family. Sentances: Dad (possibly life), Mom (10-20), Brother (25 no parole)

7. IAmA former drug dealer who paid his way through college and was ultimately arrested. AMA

Q: Do you think all or certain drugs should be legalized? (metarinka)

A: All of them. Both of my brothers are dope fiends and I cry sometimes thinking about the trouble they’ve been in and the time in jail they’ve spent because we treat this as a criminal problem rather than the health problem that it is. This is coming from somebody who has seen both sides of the fence.