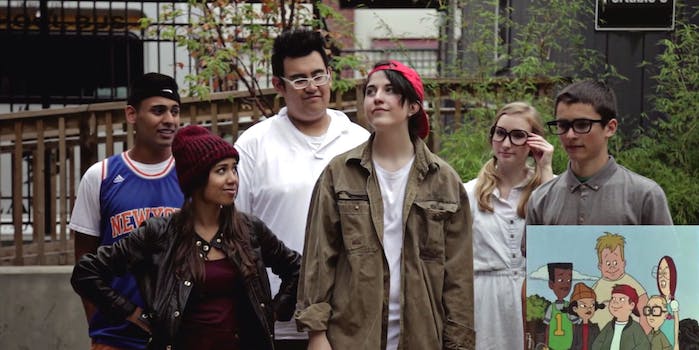 Because you're never too old to enjoy a little Recess.

A group of Recess fans have taken their love of the animated Disney program to a new level.

Student Council members at a school known only as “SJS” recently filmed and edited a shot-by-shot, live-action remake of the opening credits for the late 1990s animated series Recess. The students, none of whom are identified by name, assumed the adorably zany roles of everyone from accident-prone Gus Griswald to toughie Ashley Spinelli to, of course, leader T.J. (who has suddenly become female). They even enlisted the help of an older teacher—possibly even the SJS principal himself—to cameo as Principal Peter Prickly.

YouTube user Martin Y made sure to include a small inset showing the program’s actual opening credit sequence so viewers can compare the closeness of the edits.

And people say that millennials are lazy and uninspired.

The video, which was posted to Reddit on Oct. 3 and has 600 views to date, is the latest addition to YouTube’s treasure trove of shot-by-shot remakes of pop culture staples. Amateur videographers and actors have pieced together everything from Star Wars to Toy Story. Even comedian Reggie Watts showcased his mimicking skills when he took on the role of Rick Astley in a May 2013 video for YouTube Comedy Week.

Next up for the SJS Student Council should be Recess: School’s Out!