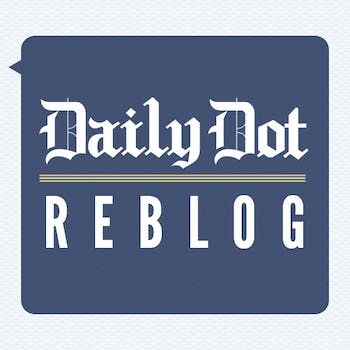 From FluffPo to HuffNo, the Daily Dot reblogs the week on Tumblr.

In this edition of Reblog, the Daily Dot’s weekly take on Tumblr, we explore the world’s most Venn diagram-friendly blogging platform, where the union of any two improbably conjoined subjects wins instant fans.

Rap Industry Fan Fiction: Rappers enjoy the same first-world problems as we all do. “There’s something endearing to read about rappers that feel vulnerable,” the creators told the Daily Dot. “…and I mean vulnerable in a stupid, relatable way, like saying ‘duvet’ instead of ‘bidet.”

Speaking of first-world problems, FluffPo floated on to our radar. The Tumblr calls out everything that is truly awful about the Huffington Post, including the superfluous slideshows. How many times can we look at nipple slips, America?

We wonder if FluffPo has met HuffNo. Someone should mash those two up. FluffHuffNoPo sounds like a trendy neighborhood.

Not all news organizations make us want to abandon journalism, though! Newsweek launched The Pork Barrel, a slick, interactive Tumblr showcasing documents from politicians wrongly mixing money and politics.

On a lighter note, two things that are always adorable, puppies and Ryan Gosling, were pitted against each other this week on “Is Ryan Gosling Cuter Than a Puppy?” The answer is surprisingly difficult!