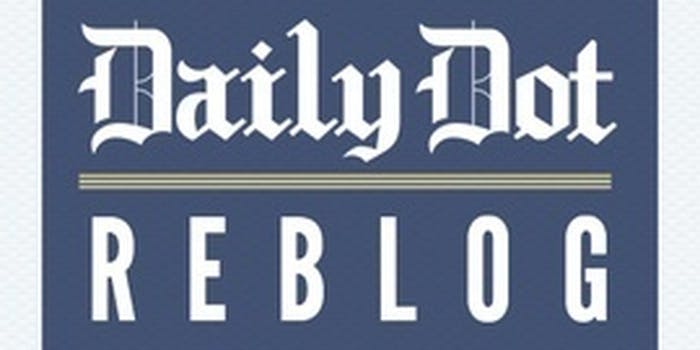 In this Christmas eve eve edition of Reblog, Newt Gringrich got nude, Kim Jong-Il laid down some licks, and the Frogman leapt onto our radar. Oh, and we made a few more additions to Gosblr, our court-mandated Ryan Gosling rehabilitation program.

So put down the Carlo Rossi and read what you missed on Tumblr while you were stuck at the airport.

First up, former North Korean leader Kim Jong-Il died on Saturday and Tumblr paid tribute to him its in its own special way all week long. We found Kim Jong-Il Dropping the Bass, where he goes all Nicki Minaj on us and drops the beat down low. Where’s your Spotify playlist, bro?

Remember Kim Jong-Il Looking at Things, a blog consisting of him just, well, looking at things? That was obviously obsolete the moment you reblogged it. So there’s a spinoff dedicated to his son, the country’s new leader: Kim Jong-Un Looking at Things. Same premise, similar grumpy face, just newer!

Speaking of attention-craving power figures, we found Newt’s Nudes. I wish I didn’t have to explain this so I’ll just plagiarize my coworker, Lauren Orsini, and let her explain it: “The site features the GOP candidate’s cherubic cheeks and doughy chin superimposed on likewise padded Renaissance bodies.” Newt would totally fit in as an Ugly Renaissance Baby.

Also this week, we profiled the awesome Frogman, the man behind your favorite GIFs, mashups, and everything that makes the Internet a fabulous place. He is Benjamin Grelle, a 30-year-old guy who lives in his parents’ house in St. Louis and can’t hold a steady job. Yet, he’s amassed more than 70,000 followers and is one of the most influential figures on Tumblr. No, this has not changed your image of Tumblr, I realize.

Lastly, on our Gosblr this week, we added Campaign Staff Ryan Gosling, Silicon Valley Ryan Gosling and Oh My Gosling, because that just had to exist, right?