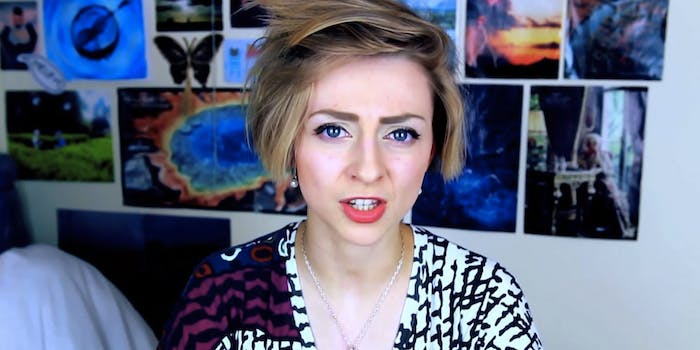 She’s all colors and passion and inner beauty.

There are millions of people who talk every day on YouTube, but there only a handful who have real conversations. Rebecca Brown is in the latter group, unafraid to talk about all topics on her YouTube channel Beckie0 that would have your Grandma blushing.

This unabashed candidness is one of the things I love most about her, coupled with the fact that she owns a purse shaped like a cartoon deer head.

Having created content for nearly 10 years on YouTube, Brown has created something of a time capsule of her life on her channel, where she has documentd the trials and tribulations of life from middle school until now. While her content ranges from vlogs about filmmaking, university, and politics to beauty, book reviews, relationships, and life adventures, Brown is most passionate about using her channel to document her ongoing battle with trichotillomania, an impulse disorder that causes a person to pull their hair out strand by strand causing baldness and emotional trauma. Brown first began suffering from trichotillomania at the age of 10, making her patchy hair an easy target for bullies. YouTube provided Brown with an escape from her reality and, for the first time, allowed her to connect with people who she felt understood her. And over the years—through her candid talks about depression, hospitalization, refusing the urge to pluck, how her disorder affects relationships, wigs—Brown has become the role model she once looked for among the trichotillomania community on YouTube.

In one of her most famous videos, Brown takes a photo a day for six and a half years to show the highs and lows of her life with trichotillomania. Brown’s courage to be vulnerable and vlog about not only the highs but the challenging moments in her life are what make her such an incredible ally and educator. The Beckie0 channel has allowed Brown to take control of her own story, and by watching her videos, viewers who previously had no knowledge of trichotillomania before now have a personal connection to the disorder.

As a longtime fan of her channel, I find myself constantly rooting for Brown and inspired by her conviction to pursue a fulfilled and passionate life. She’s all colors and passion and inner beauty, making her feel like a friend you’re sitting down to chat with each week. She’s unafraid of being herself and in each video, and she reminds us that it is the taboo topics such as sex, porn, mental illness, sexual assault, and depression that need our attention now more than ever if we hope to empower young men and women to approach life with authenticity, confidence, and compassion.