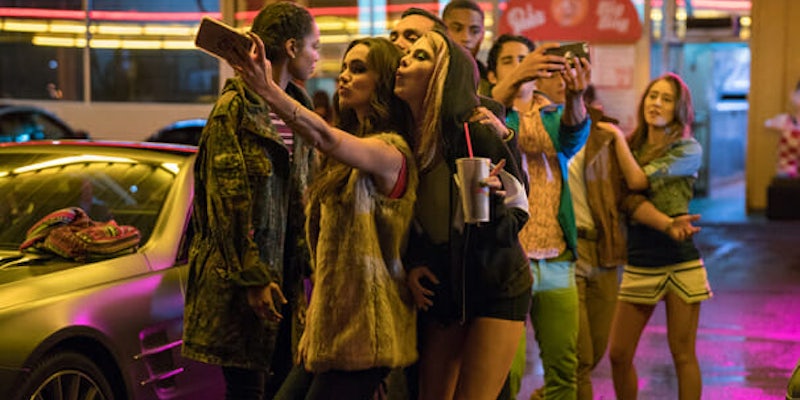 Teen movies can be transcendent and terrific. But in the era of self-involved YouTube stars, something like Netflix’s #realityhigh is designed for one specific age demographic. It’s mostly terrible, though by my own logic I’m not the target audience and my dislike for the movie is almost as predictable as this rote story about a girl who goes from nerd to popular, to not popular, to eventually being popular for being her nerdy self.

Dani Barnes (Nesta Cooper) lives comfortably under the radar at her school and spends her time working at an animal rescue shelter. She dreams of being a vet and she’s good enough to get there if she stays on track. Then she happens to catch the eye of Cameron (Keith Powers), the most popular guy on campus who is conveniently newly single. The queen bee of the school, Alexa (Alicia Sanz), does not approve and sets out to take Dani down. Alexa also hosts a popular YouTube show called #realityhigh. (Yes, they say “hashtag” when they refer to the webseries.)

You can already guess how Dani’s humiliation will be served up. Ditto for her redemption.

#realityhigh exists in the cinematic world where parents are cartoons until the script demands a moment of sincerity, so of course those moments ring false. It’s shot to look like a music video, with pretty faces, bright colors, and flashy camera moves in abundance. But it’s as boring as Saturday school and as mind-numbing as a standardized test.

I spent a portion of the movie’s runtime trying to imagine if I would be amused by this if I were a teenager. Then I thought about the terrible movies I liked when I was in high school and realized this is just a part of life and soon enough we’ll all be on to much better movies.