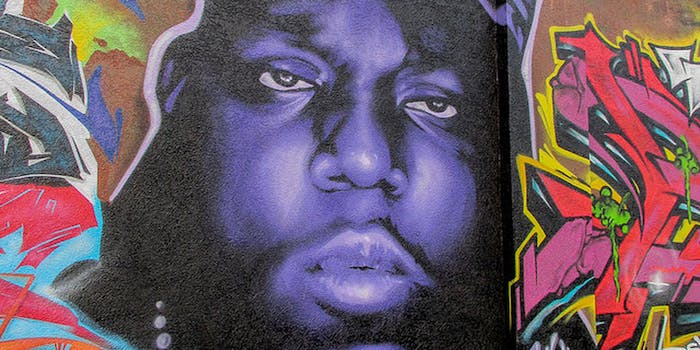 It belongs on a space capsule mixtape, between Mozart and whale noises.

The Notorious B.I.G.’s debut album, Ready to Die, hit stores 20 years ago today. It belongs on a space capsule mixtape, between Mozart and whale noises.

Illmatic is perpetually hollow-eyed, paranoid, and fatalistic in scope. Its most joyful moment, when Nas starts rapping about his birthday, is on a track where the hook reads, “Life’s a bitch and then you die.” It’s masterful, but Ready to Die matches every bone-chilling “hip-hop as CNN” report about the struggle, and then gets to champagne and Sega Genesis.

For a record that starts with a train robbery and culminates with Biggie rapping, “It don’t make sense going to heaven with the goodie goodies dressed in white, I like black Tims and black hoodies,” before shooting himself, Ready to Die is sublimely optimistic. It’s arranged like an Oreo, with radio-saving gems in the middle. I like how “Juicy” has outlasted “Big Poppa” in terms of go-to instant nirvana for DJs. “Big Poppa” shoots dice with its steady poolside lounge aesthetics; “Juicy” lingers because even non-rap fans have learned to respect and rap along. You have to mop up spilled gin after that Pete Rock-birthed, Trackmasters-assembled Mtume sample.

I just took a three-minute break to listen to “Juicy.”

Look, fellow Drake fan, I feel your trepidation. Rap loves to hammer home 1994 and the culture comes with a nagging best practices guide for what’s really real. New York City still fancies itself a genre despite its Puritan frontline of old-media guardians. As a result, we haven’t had time to really miss Ready to Die—we lost Big three years later, so it’s the most commemorated album this side of Nevermind.

But Ready to Die is an unlikely big bang penned by this brilliant character—equal parts corner hustler, made mafioso, Bart Simpson, community activist, and comically misogynist playboy. Thanks to that tuba boom voice, Big could sell throwaway scribbles like “eat y’all niggas like chocolates,” then start singing Tina Turner. Ready to Die dropped after the ’87-’93 golden era and its production expertly nods to the recent past (beats by Lord Finesse and DJ Premier, G-Funk post-Chronic influence, Lords of the Underground samples). It’s a deeply calculated instant classic collage that topples comers because of its author and protagonist.

Just listen to the thing already.