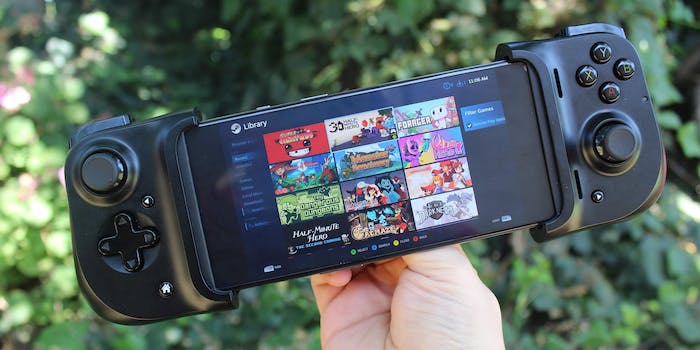 The Razer Kishi is a mobile gaming must-have

The answer to your mobile gaming prayers.

Gaming on a phone? I don’t know, sounds a little spicy to me. And ever since the concept of mobile gaming was introduced, the prospects were dicey at best considering most phones don’t come with ergonomic 16-button input gamepads. But what if they did? Razer Kishi may have finally cracked the chemistry to great mobile gaming gamepads.

The Razer Kishi is the latest innovation in mobile gaming controllers, and if you’re familiar with the sphere of phone-friendly gamepads it won’t look much different than what you’re used to. But it is! In the best possible way.

Usually, the wide world of Android and iOS-compatible controllers connect to a device via Bluetooth. Which, OK. Sure. That works. But even with the latest operating systems, you may experience latency issues. And as anyone who has ever played popular mobile games like Fortnite and PUBG, a millisecond delay can be the difference between a satisfying win, or a devastating “own.”

Razer Kishi’s approach is decidedly old-school. Instead of Bluetooth, the controller slides directly into your device’s USB-C port. No syncing, no Bluetooth lag, no heartache. Just plug and play.

If you’ve ever held a Nintendo Switch in your hands, gaming on Razer Kishi will feel all too familiar. Dare I say, it handles better, thanks to the matte finish and a D-Pad that’s actually a D-Pad.

Everything you want from a modern gamepad is there. Two click-able control sticks? Check. Four main face buttons? Check. A satisfying D-Pad. Check. Plus, four triggers, two buttons that function as Start and Select, and even a universal home button.

Gaming on the Kishi was a blast, especially since I rarely had to reformat the button inputs game-to-game. Kishi seemed to already know which default button format was best. And on the rare occasion that it wasn’t, re-mapping them was a breeze.

Another great function is the controller collapses when it’s not in use, making it perfectly portable. I was saddened to see that the collapsed controller is basically useless because it doesn’t have Bluetooth.

There’s also a passthrough connection for USB-C so you can charge your phone and game at the same time. Which you will definitely need considering the number of games you can play with Kishi, especially if you utilize cloud streaming through services like Steam Link.

All these features open up a world of portable gaming possibilities on a phone you already own. And let’s not forget the joys of emulation. With the right software in place, Kishi turns your phone into a retro gaming powerhouse. But, as any discussions involving emulation, please ROM responsibly.

Despite its functionality, Kishi manages to be a little less expensive than its Bluetooth telescopic controller at $79.99. If you’re the kind of gamer who wants to tap into your phone’s specs to get your fix, Kishi may just be the best Android controller on the market, and it fits a large swath of popular Android phone makes and models.

If you’re on an Apple device don’t despair, an iOS-friendly Kishi is on it’s way, you’ll just have to wait a little bit longer. The Razer Kishi is available now on Amazon for $79.99.