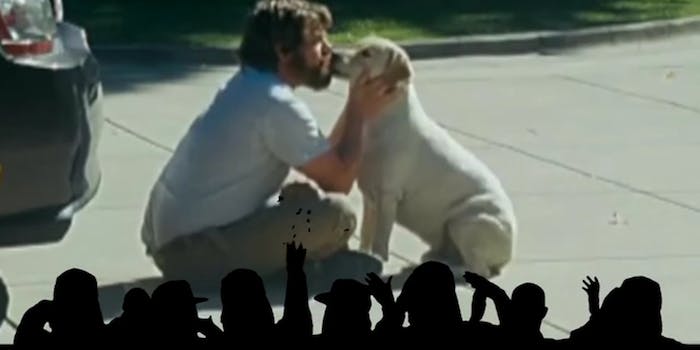 The auteur behind this four-and-a-half minute dive into cinéma vérité is Atlanta rapper Rawcus. At least that’s what he says in his amazing bio. Not much is known about Rawcus pre-”White People Crazy,” except that his mother was allegedly a drug dealer, his father a bank robber. Rawcus apparently served six years in prison for killing his stepfather, with early release in 2013. In the video, his face and hands are covered, obscuring his true self.

Rawcus, who wishes to remain anonymous, said via email he included the YouTube fail footage because it’s become a modern plot device of the online experience and much of reality television.

“I have determined after years of TV and the Internet mind programming that ‘crazy behavior’ is putting yourself into harm’s way to look cool to your peers,” he said. “What’s really crazy is the people never actually expect to get hurt; they expect the footage to be ‘epic,’ as y’all white people would put it. No offense.”

When asked if he thinks white people excel in genre of the YouTube fail, Rawcus did not hold back:

“Excel is an understatement. If you could receive a college degree that had pay on the other end which was upwards of $60,000+ a year for doing crazy things, only white people would attempt to complete the courses and get the degree. What’s more sad is that it would be for bragging rights to friends as opposed to self-satisfaction and furthering themselves in life. I mean, look at the Guinness Book of World Records. All of those stupid a** records are held by white people.

1) Most rattlesnakes held in mouth

2) Most lit fireworks strapped to the body

He further addresses MTV’s role in perpetuating the theme/meme that informs his song.

“MTV really messed up society, from Beavis and Butt-head to Jackass, Jersey Shore, and Teen Mom. It’s basically pushed into society that it’s OK to have lives full of drama and problems because everyone on TV is having the same issues, so it must be OK and cool.”

Rawcus’s song extends beyond YouTube. He’s been tweeting at white people on Twitter, and you can now buy the ringtone on iTunes. The reactions to his song since its release have been strong—many people agree white people are indeed crazy. Others don’t get his satire. Rawcus claims some members of certain white power subcultures have been upset by his parody.

“I doubt these people would go to extreme measures, such as hurting an individual for something that is obviously a partial joke and just a fun poke at society,” he says. “But hey, I could be wrong. White people crazy.”

For now, he adds, it’s imperative that he remain anonymous, free to mold more of his keen early 2014 observations on society.

“Plus my probation officer might use my lyrics against me somehow. Until I’m in the clear, I’m under here.”