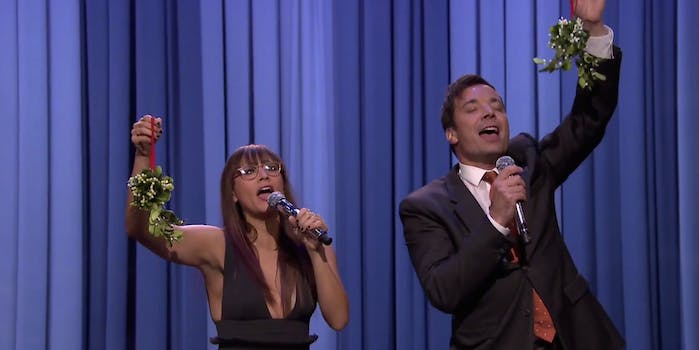 Rashida Jones and Jimmy Fallon break out the holiday parodies

"My Secret Santa don’t want none unless you got gifts, hon!"

The turkey’s barely settled, but it’s already time to bring out the holiday parodies.

In what’s turned into an annual tradition, Jimmy Fallon and Rashida Jones teamed up to bring together the biggest hits of the year to the tune of holiday cheer, just as we’re coming to terms with the surplus of tryptophan in our systems.

Starting off with the often-forgotten Thanksgiving carols, it’s a musical journey through the highs and lows of the next month that’ll easily have people singing, “Turducken for what” and clamoring for more booze. If nothing else, it’s a welcome twist on songs you’ve likely heard way too often on the radio lately.

They still can’t let it go—but unlike Frozen, that may be a good thing.