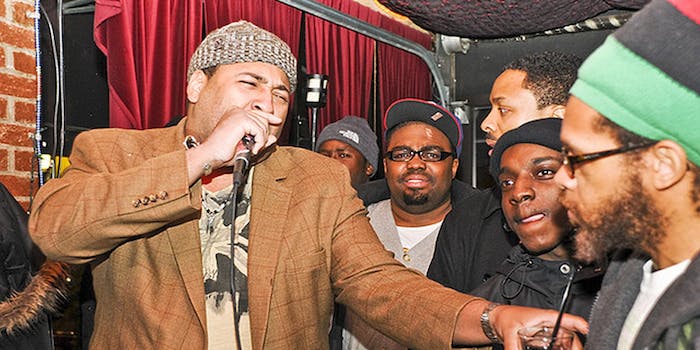 Rapt.fm is a nonstop trainwreck of freestyle battles

A new startup wants you to “rap with anyone.”

Are you tired of having to go to rap shows to see rappers school each other? Would you prefer to login to a site, and see rappers battling each other all over the world? Someone had the same dream.

Wednesday night, a new site called Rapt.fm launched in beta. The year-old Detroit-based startup is the brainchild of CEO Erik Torenberg (a.k.a. T-berg), and offers 24-hour live one-on-one rap battles, or cypher battles. You can just observe or throw your rap in the ring. As an inclusive entity, Rapt.fm wants you to be able to “rap with anyone.”

That real-time capability allows for some interesting interactions; you can suggest a topic on which emcees can freestyle, for instance, sort of like attending an improv show. As I strolled through the site, I saw mostly guys rapping in front of webcams in dorms or offices, which didn’t really translate the energy of a typical rap battle. Thankfully, the battles are timed.

With this open forum, there will definitely be a lot of amateur night, but as a platform for discovering new talent and promoting music, it has potential. Rapt.fm is holding a YouTube song contest, in conjunction with Tommy Boy Records. The winner will get to record and distribute a single via the label.

Torenberg and his lead front end developer, Jarrett Abello (aka Johnny Gigantic), even wrote an original rap for the beta launch, called “The Launch.” Sample lyrics, via another rap startup, Rap Genius:

Check, we need checks somebody invest quick
Rapt bout to blow like chat roulette except less dicks
Striving for stardom you clearly living in fear
Started at startup weekend now we here.

Hopefully Rapt.fm does not devolve into Chatroulette. Might have to give that rhyme the Gas Face, though.