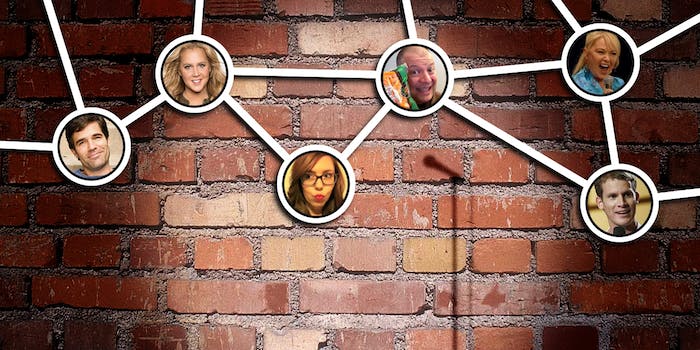 Drawing the line in the debate over rape jokes

The crux of this issue is not banning certain jokes or policing thoughts. If you are going to tell a joke about rape, advance the conversation.

Last week, comedian Amy Schumer’s Comedy Central show, Inside Amy Schumer, included a sketch in which she plays an aggressive workout instructor who tells a woman that doing a certain type of squat will make her “un-rapeable.” It was funny to me, because as a woman, that term is impossible to fathom. As comedian Ever Mainard explained in a set early last year, women are always wondering when it’s going to happen to them.

It is also why the threats against writer Lindy West filled me with dread last week. In late May, West appeared on W. Kamau Bell’s FX show, Totally Biased, for a brief debate with comedian Jim Norton about whether telling rape jokes contributes to rape culture, or if freedom of speech is the bigger issue. Both were civil, but neither left agreeing with the other. 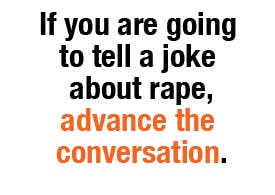 Once the video was uploaded to YouTube, the online threats against West started rolling in. There were vile comments about her body, about the inevitability of her ever having to worry about getting raped. And then there were those who wished she would get raped as punishment for speaking out… about rape. Cue “Yakety Sax.”

In a video accompanying a response piece she wrote for Jezebel, West lists many of the comments and threats, and while it’s sobering to watch, it’s also quite powerful. She took the often anonymous comments flung at women every day and gave them a face. This was sexism writ large, and it underscored exactly why this conversation has to happen.

Last Wednesday, Norton, who always held his argument was about a comedian’s right to free speech, wrote a piece for xoJane calling out those trolls:

To anyone whose goal is to defend what you interpret as attacks on comedic free speech, don’t immediately let the term “rape culture” cause you to dismiss someone’s argument entirely or make you think that life as you know it is about to end. It’s not. Stop being so fucking mentally lazy. Do you really want your only contribution to the discussion to be, “I hope you get raped”?

In the year since Daniel Tosh ignited a debate about rape jokes, this argument has been stuck in a frustrating loop online. The crux of this issue is not banning certain jokes or policing thoughts. If you are going to tell a joke about rape, advance the conversation. 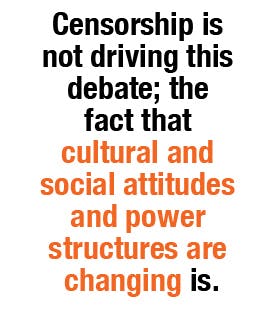 Censorship is not driving this debate; the fact that cultural and social attitudes and power structures are changing is. The recent rally to take down Facebook pages filled with rape jokes and hate speech, and the outcry from men who felt they were being censored or silenced, speaks to that. How many women have been silenced after a sexual assault?

One argument that got a lot of attention was Rookie writer Sady Doyle’s, in which she addressed comedian Sam Morril after seeing his show. One of his jokes—“My ex-girlfriend never made me wear a condom. That’s huge. She was on the pill… Ambien”—did not sit well with Doyle. Morril’s bait-and-switch punchlike might elicit some laughs, but the imagery of him, or any other man, having sex with an unconscious woman, in a year when Steubenville was on the world stage, sticks around longer than the laugh.

Our culture is broken, and comedians have the ability to comment on that. Maybe even help fix it. They have power over an audience. What should they do with it?

As illustrated by West and Norton’s discussion, the issue tends to fall in two camps: Comedians should be able to say what they want, uncensored, and comedians shouldn’t make jokes that contribute to a culture where sexual assault is OK. Here are a few recent responses along the spectrum, from comedians:

In response to West’s Jezebel piece, Roseanne Barr let it be known she is not a fan of censorship, in a series of tweets. One tweet proposed laughter can help victims:

for a lot of ppl: laughing at the horror they lived through is a great way to dissipate the pain-laughing is what victors do—I’m proof.

Harry Terjanian wrote a blog defending Morril’s right to express himself in a piece called “In Defense of Rape Loving Comedians”:

It’s unfair to label myself or anyone who isn’t against Sam Morril or Daniel Tosh as a misogynist. It’s not misogyny that pushes me to defend Sam Morril, but the defense of art. Whether you like it, whether it’s good, or it’s utter garbage… it’s art. You have the right to not like art that makes you uncomfortable, but you don’t have the right to never be made to feel uncomfortable. And even if you did have that right, how could we enforce it?

On that same Morril tangent, Yannis Pappas defended the right to free speech in his own Facebook post:

Comedians talking about rape and other horrific realities is actually a service to society because the alternative is a society, like we have many of in the world now, where there is no comedy at all and as a result amongst other horrible unjust realities, women are wantonly rapped en masse and it is never questioned because there is no free speech forum where sensitive losers who had no attention from their parents are trying to make you laugh, think and be entertained.

Toronto comic Amanda Brooke Perrin wrote a Tumblr post about telling a rape joke as part of her act. It was her closer, one that “worked 100% of the time.” It was about being victimized, and not being prepared, done in the style of a casual Facebook status update. One night last fall, while doing some banter with a crowd about losing their virginity, she noticed a woman in the front row was uncomfortable. She asked the woman: “Were you raped?” She nodded. 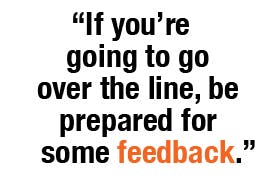 “I don’t think it’s fair for me, a person who has never been in that position, to say that,” Perrin related to me by phone. “The joke itself was so ridiculous. The part that wasn’t funny was when I blurted out, ‘Were you raped?’ After that, I thought maybe I should being raising awareness. If I can’t write another joke, then I’m not much of a comedian.

“I still appreciate edgy comedy. I like Anthony Jeselnik; he’s created a brand, and people know what to expect. I can’t pull that off. If you’re going to go over the line, be prepared for some feedback”

On U.K. comedy site Chortle, Dave Cohen argues that if we can shut down Facebook’s sexist pages, we can take sexism out of comedy, but it might take a while:

Unlike racism, misogyny continues to deliver big laughs to big audiences, whether we like it or not. And as long as that’s the case then comics who perform such material won’t make any effort to give it up.

On his Tumblr, Rob Delaney responded to a question about how he would deal with misogyny at an open mic. It sums up the argument pretty well: