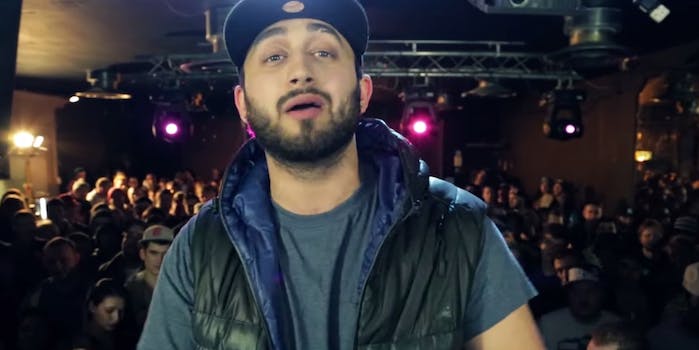 The most polite rap battle you’ve ever heard

Almost all rap battles are a duel of wits and machismo. This one is no exception—it’s just very nice.

Almost all rap battles are a duel of wits and machismo. Participants put down their opponents with the most clever and crowd-pleasing insults they can come up with on the fly. As a result, several battles end in fisticuffs, brawls, and near riots.

That’s why it’s refreshing to see the rap duo of Shuffle-T and Marlo take a different approach to their battle with fellow British rappers Big J and Lefty. Battling during a Don’t Flop Entertainment event, both teams decided that instead of attacking their opponents they would prop them up with compliments and heavy-handed flattery instead.

The whole thing is an entertaining and laugh-inducing take on the classic battle rap format, made even more bizarre with fans in the crowd growling out “Get him!” and “Body bag!” and “Let’s go!” after every line.

In the end, Shuffle-T and Marlo won the battle (and surely their opponents’ hearts) with hilarious quotables like:

Marlo: “Big J, you’ve got people telling you your type’s dead, just a single syllable two-bit rhyme head. Fuck them! Only you do your style best! It’s amusing, plus the execution’s priceless.”

Shuffle-T: “So does he get our seal of approval, son?”

Marlo: “Yes, ’cause you stick to your guns like you glued your biceps.”