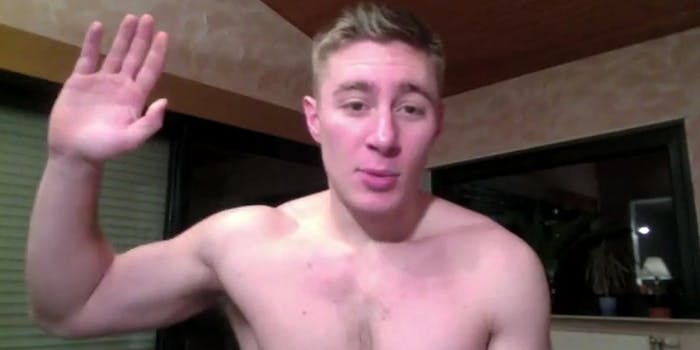 Randy Phillips the gay soldier who made a name for himself by coming out publicly online just after the military lifted its defacto ban on gays, continues to grow his YouTube channel.

Randy Phillips prefers Taylor Swift over Carrie Underwood, writes with his right hand and is colorblind.

Those are some of the factoids we learned from Phillips’ in a question and answer session he hosted on his YouTube channel today—sans shirt, like many of his other videos.

The gay United States airman, who came out to his father in a personal video, answered questions his fans had sent in via his Twitter account.

This isn’t the most revealing video that he’s produced but gave fans a glimpse into what he is really like. Phillips said he wears a 11.5 shoe size (his father wears a size 12) and although he tries to avoid red meat, he loves hamburgers. On a more of a serious note he offered advice to those being deployed soon.

“Make fun out of everything because you’re going to have to do some really crappy stuff,” Phillips said. “Have a good time with it and always have a smile on your face.”

Phillips also answered our question about future plans for his YouTube channel, something that we noticed that is moving to a more light-hearted direction. He originally created his channel to help come out of the closet but now that he is out he doesn’t want to be identified as just being gay, he said.

“I want to get away from that theme and show the world that I am just a regular, boring, red-blooded American guy and there is nothing special about me,” Phillips said.  “So many people have channels out there that are gay-themed and I make one gay video and it is a hit….I want to show you that is not all my life.”

“But I just wanted to show that that does not define me and there is a lot more interesting and not so interesting things about me,” he said.

We consider this video a good starting point.