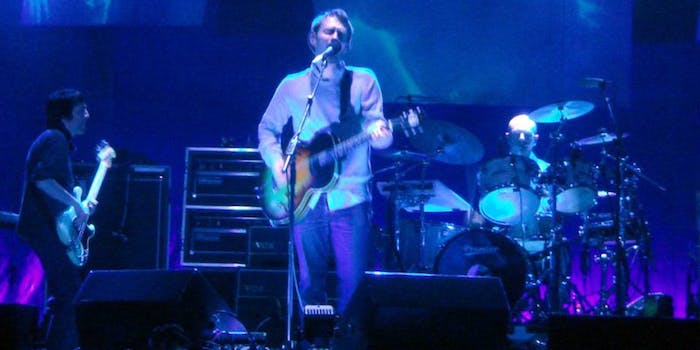 Exit music (for an app).

On Monday, legendary British rock band Radiohead released a collection of new original music—albeit in an unlikely format. The band put out a bunch of snippets of previously unreleased ambient works in an update to its PolyFauna smartphone app.

The app, which was originally released in February, is a collaboration between the band, long-time producer Nigel Godrich, and U.K.-based design studio Universal Everything. The newly reworked version boasts reimagined visuals as well as the new music.

Your screen is the window into an evolving world.
Move around to look around.
You can follow the red dot.
You can wear headphones.
You can get some pretty strange looks on the train.

In execution, the app is similar to ambient music pioneer Brian Eno’s 2008 app Bloom, which allows users to generate randomly created soundscapes through general parameters set by tapping on the screen. The band has said that the app was inspired by the the opening track from its 2011 album King of Limbs, which is also called ?Bloom” and features sounds much like those produced by Eno’s app.

In an essay published in The Guardian, a spokesperson for Universal Everything noted that the company intentionally omitted any directions in how to use the program from PolyFauna itself. ?Many apps and games begin with tutorials, but we intentionally omitted any explanation and kept the instructions to a minimum,” Universal Everything explained. ?This added to the app’s sense of discovery, giving the user a feeling of satisfaction that you wouldn’t get from just following commands on-screen.”

The new music itself, however, harkens back to the most spaced-out, ambient sections of the band’s 2000 masterpiece Kid A. There are hazy synths holding gradually evolving tones, consciously lo-fi electric drum noises, and the occasional whisper of Thom Yorke’s distinctive falsetto softly harmonizing over the woozy instrumentals.

Rolling Stone speculates that the musical sketches appearing on the app might be the band tipping its hat toward what its next full-length might sound like.

Here are some YouTube videos of the revamped app in action:

Radiohead are slated to head into the studio later this month to record their ninth full-length album, but guitarist Johnny Greenwood told NME that the creation of the album is a ?slow-moving animal.”